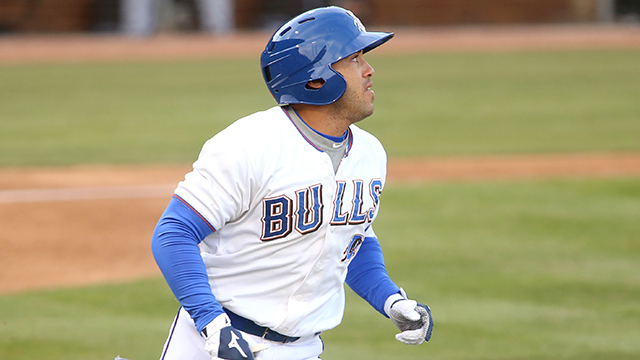 DURHAM - The Durham Bulls jumped out to an early lead behind Dayron Varona's homer, but couldn't hold on as they lost to the Louisville Bats 4-2 on Friday at the DBAP in front of a sellout crowd of 10,008. The Bats (12-8) sweep the series 3-0.

Varona opened scoring with his solo home run off of Cincinnati Reds top prospect Robert Stephenson in the third inning. Varona's homer hit the Bull in left field atop the Blue Monster. The Bulls (10-13) made it a 2-0 lead when Richie Shaffer singled, got to third on Kyle Roller's double, then scored on Daniel Robertson's sac fly to center field.

Louisville's Jesse winker hit a three-run homer off of Snell in the sixth, and the Bats added another run later in the inning thanks to a pair of walks and a single. Stephenson (2-1) took the win with 11 strikeouts, three hits, three walks and two earned runs in six innings. Jumbo Diaz earned the save, his first, with 1.2 hitless innings and two strikeouts to end the game.

The Bulls hit the road and take on a familiar opponent, Louisville, for a two game series beginning tomorrow at 6:05 p.m. at Louisville Slugger Field. Durham then travels to Indianapolis from May 2-4, before returning home for a seven-game homestand from May 6-12.