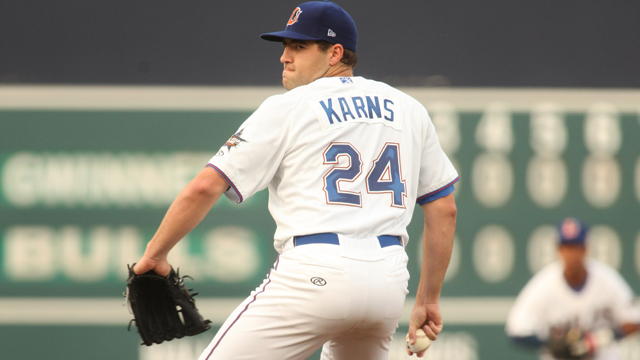 Nathan Karns struck out 10 batters over 6 1/3 innings, but the Durham bullpen couldn't hold the lead

DURHAM, NC - The Durham Bulls squandered numerous scoring opportunities in a 5-1 loss to the Louisville Bats Saturday night at the DBAP in the opener of a four-game set.

Durham (25-19) had at least two runners on base in every inning except the eighth, but the Bulls left a season-high 16 men on base while going just 4-for-18 with runners in scoring position.

For the first six innings it looked like one run might be enough, as in the second inning Robby Price doubled and later scored on a single by new addition Jayson Nix.

Durham starter Nathan Karns kept Louisville off the board until he departed in the seventh. Karns struck out six straight Bats at one point and became the first Bulls pitcher this season to record 10 strikeouts in a game. The performance vaulted him into the International League strikeout lead after starting the night in eighth place. Overall, the right-hander allowed just five hits in 6 1/3 innings, throwing 62 of his 99 pitches for strikes.

Durham's relief corps wasn't able to hold the lead, however. Braulio Lara (0-1) entered with the tying run on base and one out in the seventh, and proceeded to allow a stolen base and a walk, followed by a three-run homer over the Blue Monster by Ruben Gotay as the Bats took their first lead of the game.

Then in the ninth, Felix Perez hit a two-run shot to add some insurance and make it a 5-1 ballgame.

Nick Christiani (1-0) got the win in relief of Louisville (20-22) starter David Holmberg, while Jumbo Diaz got the final two outs for his eleventh save, putting him in a tie for first in the league with Bulls' closer Kirby Yates.