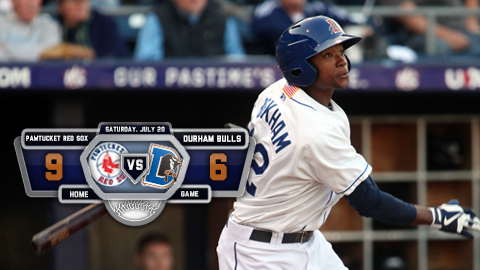 The first-place Durham Bulls lost their third straight game to the IL North leading Pawtucket Red Sox 9-6 on Saturday night at the DBAP. The three game skid matches a season high for Durham.

Pawtucket jumped on Bulls starter Merrill Kelly (L, 4-1, 2.57), who entered the game undefeated and sporting a 1.70 ERA. Jackie Bradley, Jr. tripled and hit a three-run homer off of Kelly, as Pawtucket leapt to a 5-1 lead after four innings. Kelly gave up nine hits and six runs, seeing his scoreless inning streak snapped at 17.

The Bulls gave up 9 runs for the second straight night and have surrendered 22 to the Red Sox in the last three games, matching the total they had given up in the 11 games leading up to the All Star Break.

Durham pitchers gave up a season-high 16 hits. The Bulls defense also made a season-high four errors and had a passed ball and wild pitch.

At the plate, the Bulls were 0-for-6 with runners in scoring position and were held to five hits in the first seven innings by knuckleballer Charlie Haeger (W, 2-1, 6.56). But for the second night in a row, the Bulls rallied in the eighth.

Shelley Duncan singled in Brandon Guyer, who scored his league-leading 68th run. Leslie Anderson then hit a two-run homer to right, his 13th of the year. Tim Beckham followed with a shot over the Blue Monster, his third of the year and the third time the Bulls have gone back-to-back.

The series and homestand concludes on Sunday at 5:05pm. The Bulls will try to win the final game and avoid being swept for the first time this season. RHP Matt Buschmann (5-0, 2.36) starts for the Bulls against Red Sox RHP Allen Webster (5-2, 3.41).