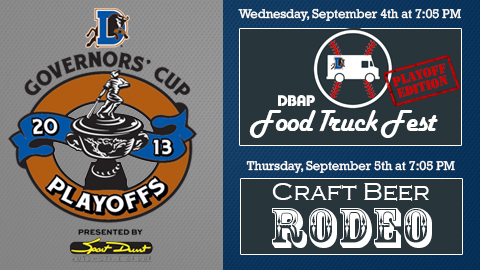 On Wednesday, September 4, eight of the Triangle's most renowned food trucks will once again make their culinary specialties available during the DBAP Food Truck Fest: Playoff Edition. Participants at the DBAP Food Truck Fest: Playoff Edition include Only Burger, Chirba Chirba, Parlez-Vous Crepe, Sweet Stacey Cakes, BaguettAboutIt, Porchetta, The Humble Pig, and American Melt Down. Fans with tickets to the Game 1 will have access to all of the trucks, which will each have select menu items available for purchase at their locations along the Diamond View I concourse within Durham Bulls Athletic Park.

Game 2 of the first round on September 5 will feature the ballpark's first ever Craft Beer Rodeo, where fans will be able to experience an expansive selection of craft beers along the Diamond View I concourse. Once inside the ballpark, fans can sample and then purchase $5 tokens to enjoy pints from breweries including Anchor Brewing, Bear Republic, CBC, Cottonwood, Carolina Brewery, Foothills, Sierra Nevada, Sam Adams, Lagunitas, and Innis and Gunn. A portion of the proceeds from token sales will go to the Durham Bulls Youth Athletic League.

The first 1,500 fans at each first round game will receive a complimentary Rally Towel, courtesy of Sport Durst Automotive Group. Both games have a scheduled first pitch of 7:05pm, with gates at the DBAP opening at 6:00pm.

Single game playoff tickets are $10 for all seating bowl locations. Groups of 20 or more can purchase playoff tickets for $8 each. Tickets for the 2013 Governors' Cup Playoffs can be purchased now at the DBAP box office, by phone at 919.956.BULL or online here.