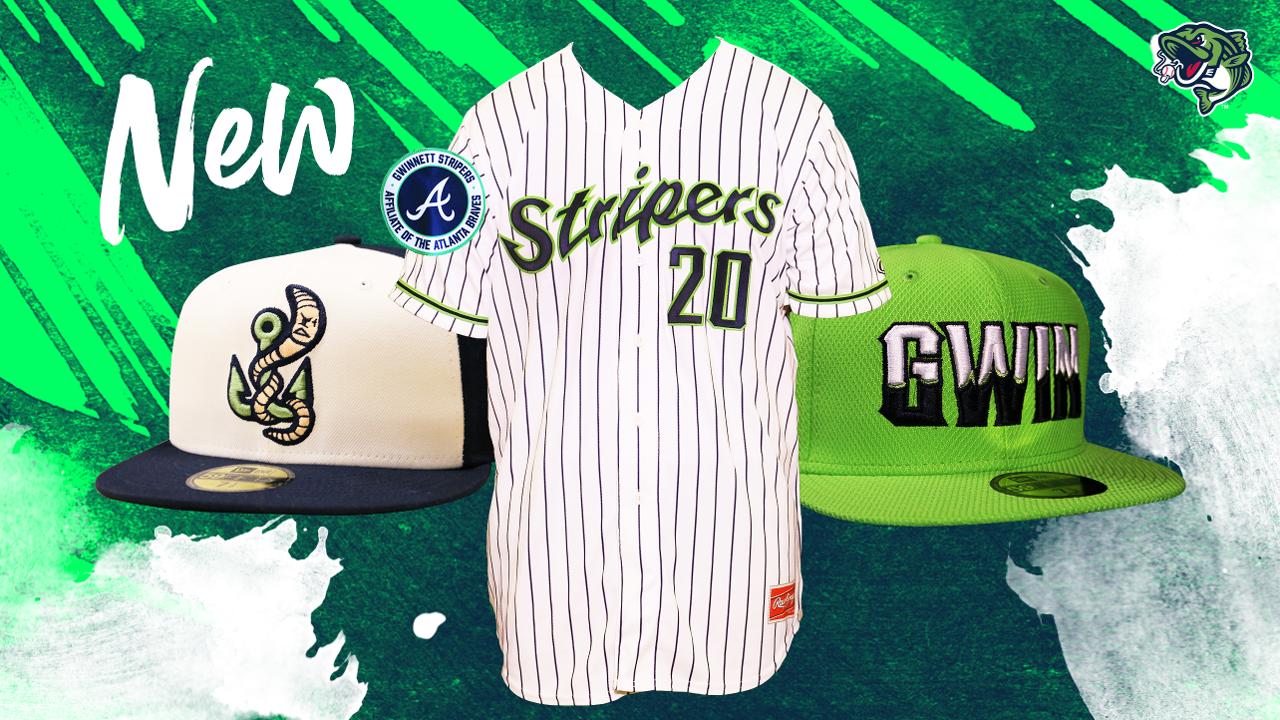 Beginning with the 2020 season, the Stripers will wear a bass green batting practice cap featuring an all-new "GWIN" logo, as well as a two-tone navy and white cap featuring the "Worm" logo as part of their retro alternate uniform. The team will also wear a revamped home pinstripe jersey that removes the piping from the neck and button areas and adds an Atlanta Braves affiliate patch to the sleeve.

The Stripers' new batting practice cap was created with two goals in mind: to bring the popular "bass green" color into the cap lineup for the first time, and to show a strong connection to the team's home in Gwinnett County. The latter goal was accomplished with the creation of the "GWIN" logo, a mark that displays the navy, waving waters of Lake Lanier meeting the white sky within the "GWIN" lettering in the team's custom font.

The updated two-tone "Worm" cap replaces the previous all-navy version worn from 2018-19. A change to the crown with a white front provides a seamless stylistic fit with the jersey it is paired with, the retro alternate that is modeled after the Braves' iconic blue-sleeved feather tops worn during the 1970's. It also helps distinguish the cap from the Stripers' all-navy home and alternate versions.

Changes to the Stripers' home jersey were made to simplify the classic pinstripe design. The "Stripers" wordmark now stands alone against the navy pinstripes, a cleaner look without the clutter previously created by piping. Navy and bass green piping remains around the bottom of the sleeves. The jersey sleeve patch has been updated, with the "Fish Tail" logo replaced by a patch featuring the Braves' "A" logo and boasting the Stripers as "Affiliate of the Atlanta Braves."

The "GWIN" logo was developed by the Stripers' in-house creative team under the direction of Vice President and General Manager Adam English, while the Atlanta affiliate patch was designed by the Braves' creative team.

"In introducing these new looks, we hope to further strengthen the Stripers' unique brand," said English. "With the new 'GWIN' logo, we wanted to create something that is bold and unmistakably Gwinnett, that citizens of this county can proudly wear to represent their home. The updates to the 'Worm' cap and home jersey help to make our uniforms cleaner and more cohesive, and the addition of the Braves sleeve patch honors our core identity as Atlanta's Triple-A affiliate."

The "Worm" alternate caps are on sale now at Bobby's Tackle Team Store at Coolray Field and online at GoStripers.com. Fans can secure the "GWIN" batting practice cap through a waitlist available at GoStripers.com, with shipping expected in early February.