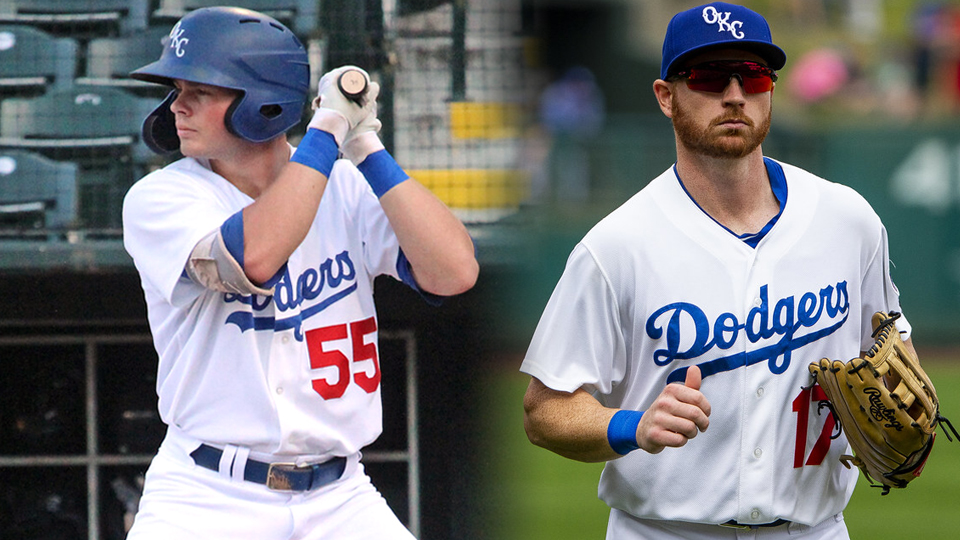 This is Thursday's Gavin Lux update -- he is still the hottest hitter in affiliated baseball. Oh, and Kyle Garlick had himself a day too.

Lux, the Dodgers' No. 2 prospect, notched his first career five-hit game, homered in his fifth straight contest and extended his Triple-A-opening hitting streak to 15 games in Oklahoma City's 18-5 win over Iowa. Meanwhile, Garlick went deep three times for his second three-homer game of the season as the Dodgers hit eight dingers in the blowout.

"Everyone here is pretty much in awe of what he's doing," said Oklahoma City manager Travis Barbary. "When he gets a double, everyone's thinking, 'Really? Here we go again.' Then, he hits another homer, and you can only think, 'Really?' There's a little bit of sarcasm in that, but I think everyone here knows we haven't seen someone be this hot before. Even my hitting coach Scott Coolbaugh said that he hasn't seen a hitter on a run like this. In the gap, out of the park, all over the place -- if he gets his pitch, he's not gonna miss it."

Batting leadoff Thursday, the left-handed slugger got things going quickly by stroking a double on the first pitch he saw from Iowa starter Tyson Miller. He singled up the middle in the second and added another double off Miller in the fourth. Facing right-handed reliever Duane Underwood to open the sixth, Lux went deep to right-center for a solo shot and his third extra-base hit of the game. His fifth and final knock of the day came in the ninth off right-hander Dakota Mekkes when he beat out an infield single to shortstop Zack Short. The only time Lux was retired was when he grounded out to second on a 98-mph fastball from right-hander Dillon Maples in the eighth inning.

The five hits trumped Lux's previous career high of four, established three times during his brief time with Oklahoma City alone -- most recently on Tuesday. In fact, Thursday was his ninth multi-hit performance with the Dodgers since his promotion.

"At this point, you just try to stay out of their way," Barbary said. "I talked to him yesterday after our pitcher got on and said, 'Listen, I want you to bunt him over.' He just kind of looked at me. I was just kidding, obviously. I think the only thing I could to do him now is hurt him, so just let him keep on like he has been doing and he'll be fine."

As good as Lux was Thursday, he was just one part of Oklahoma City's power show in Des Moines. Garlick first went deep to left in the third inning, going back-to-back following DJ Peters' blast. Garlick added his second dinger four innings later, also to left. Both moonshots either reached or went over the roof of a building well beyond the left-field fence. His third long ball came in the ninth, when he lifted a 51-mph offering from position player Taylor Davis out to center.

The 27-year-old right-handed slugger became the first Minor Leaguer with multiple three-homer games this season. The other came on May 5 at New Orleans, but he needed 11 innings to turn that home run hat trick. Garlick also homered three times in a game for Class A Advanced Rancho Cucamonga on April 18, 2016.

"Kyle has always been a streaky guy," said Barbary. "But when he's on, he doesn't miss his pitch. He doesn't chase, and when he gets the pitch he's looking for, he has the chance to do a lot of damage."

Peters (two), Connor Joe and Edwin Rios rounded out Oklahoma City's home run total Thursday. Joe's only dinger and Peters' second each came off the soft-tossing Davis as part of a nine-run ninth inning that gave the Dodgers the runaway victory. Rios's two-run shot in the first inning opened up the club's scoring and traveled an estimated 452 feet to right-center, where it hit his photo on the videoboard.

The Dodgers head home to Oklahoma City on Friday to begin a three-game series against San Antonio after going 5-3 over road trips to Memphis and Iowa following the Triple-A All-Star break. The club, which owns a 43-54 record, is 12-8 since Lux, Peters and top Los Angeles pitching prospect Dustin May were added to the Triple-A roster on June 27, and that's no accident, according to the skipper.

"It's been great the way things have worked," Barbary said. "The guys that have been here have really embraced the new guys. I think they've added some youthfulness to the clubhouse and fit in really nicely overall. It's just really cool to watch how the guys have taken them in so far."