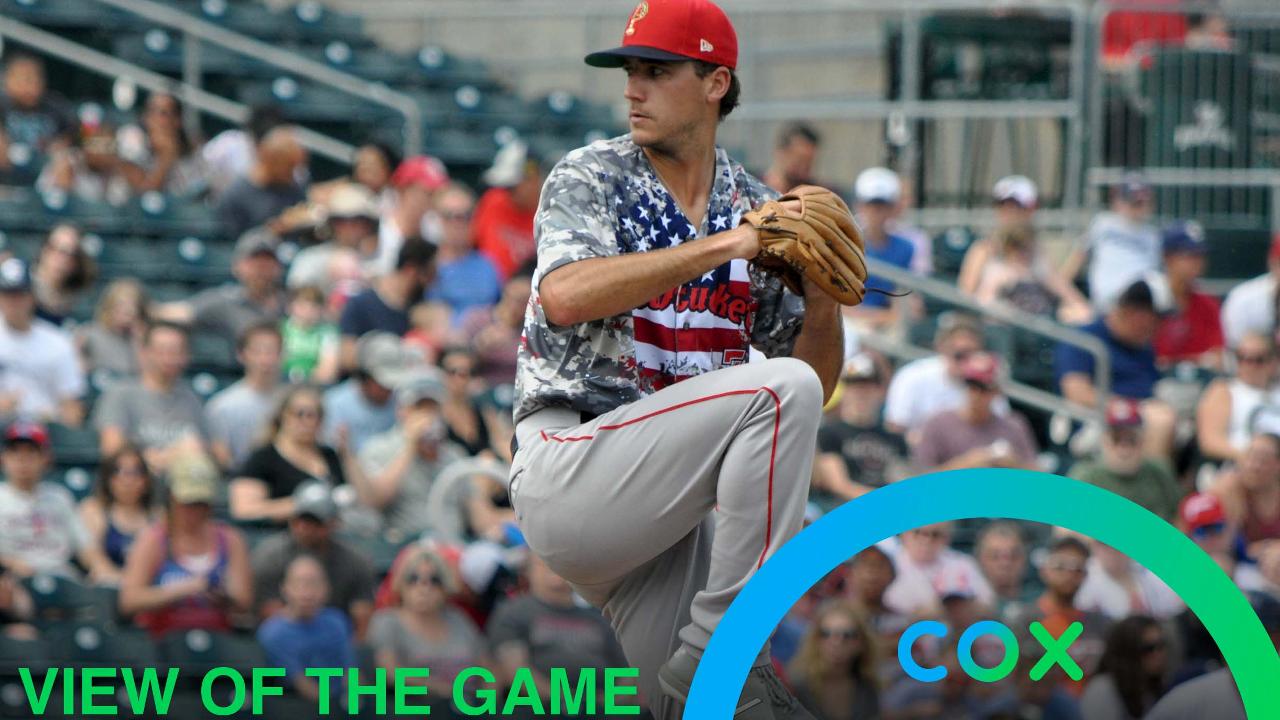 ALLENTOWN, PA - Pawtucket built a four-run lead in consecutive contests and subsequently held off a late Lehigh Valley rally each time as the PawSox won a pair of games Sunday, 5-3 and 5-4, at Coca-Cola Park in Allentown to lead the team into the three-day Triple-A All-Star break.

After the Pigs (42-44) took the first two games of the four-game set in walk-off fashion on Thursday and Friday nights, Pawtucket (35-52) responded with the two close wins on Sunday to split the four game series.

Pawtucket led 4-0 into the bottom of the seventh in the first game, which was the completion of a rain-suspended contest from Saturday night, then fended off three late Iron Pigs runs to win by two. Then in the nightcap, the PawSox led 5-1 in the final inning before Lehigh scored three two-out runs before Domingo Tapia collected a game-ending strikeout with a 99 MPH fastball.

Pawtucket had scored three times against spot-starter John Curtiss (0-1) on Saturday night before heavy rains suspended the contest in the third. Bryce Brentz' RBI double and then Cole Sturgeon's two-run homer (4) left the PawSox ahead 3-0 when the contest resumed at 11:04 am Sunday.

Josh Smith (3-2), activated early Sunday off of the team's injury list, tossed 4.2 solid innings in his first appearance with Pawtucket since June 3rd. He kept the Iron Pigs off the scoreboard until allowing two runs in the seventh, and was lifted in favor of Darwinzon Hernandez with the bases loaded and two outs.

Hernandez, making his second relief appearance since being moved out of the Pawtucket rotation this week, retired Adam Haseley on a line drive to center to keep a 4-2 lead. He then worked a 1-2-3 eighth inning, and has retired all seven batters faced in his two outings out of the bullpen.

Josh Ockimey provided some insurance with a solo blast in the eighth (team-leading 17th) against reliever Tyler Viza (4.2 innings pitched, six hits, two runs). Trevor Kelley allowed a run in the ninth, but finished the win by inducing a 1-4-3 double play grounder to earn his fifth save of the season.

Kyle Hart (4-3) tossed five innings of one-run ball while the PawSox offense had a pair of multi-run innings to provide just enough of a cushion for the bullpen to hold off a late Lehigh comeback.

Sam Travis hit run-scoring singles in the first and third innings against starter Jose Taveras (1-1), and those combined with an RBI double by Brentz put Pawtucket ahead 3-0 into the fourth.

Hart permitted his lone run in the fourth on an RBI single by Ali Castillo, but then Pawtucket added two runs in the sixth on bases-loaded walks by Oscar Herandnez and Gorkys Hernandez. The PawSox led 5-1 with two outs and one man on base in the seventh inning.

Mike Shawaryn, however, permitted a two-run home run to Phil Gosselin (2) to make the score 5-3. Then after Haseley walked, Shawaryn was replaced by Domingo Tapia who allowed an RBI double to Austin Listi that brought the Iron Pigs to within one run. Nick Williams walked to put runners on first and second, but Tapia then fanned Jan Hernandez to finish his second save in exciting fashion.

The PawSox get back to work on Thursday night against Buffalo to begin a five-game series and a 12-game homestand. First pitch is scheduled for 7:05 pm, and radio coverage on WHJJ (920 AM and 104.7 FM) and throughout the PawSox Radio Network begins with the pre-game show at 6:35 p.m. The game can also be seen throughout New England on NESN.

The 12-game homestand represents the longest scheduled homestand for the PawSox in 27 years - since a 12-game homestand in 1992 (from July 29 - August 9). The Sox and Bisons will play a make-up doubleheader on Friday, July 12 beginning at 4:35 pm on Jackie Bradley Jr. Gold Glove Bobblehead Night.

The teams will play single games on Saturday, July 13 at 6:15 pm (Prince & Princesses Night & Fireworks) and Sunday, July 14 at 1:05 pm (PawSox Cap Day on another Family FunDay at McCoy).

Louisville visits the following week for a 4-game series with 7:05 pm games vs. the Bats on July 15 & 16, a 6:05 pm start on July 17, and an 11:05 am morning affair on July 18. Finally, the Charlotte Knights come to town over the weekend of July 19-21 for a 3-game set highlighted by Saturday, July 20 at 6:15 pm on Alex Cora World Series Champion Bobblehead Night followed by Margaritaville post-game Fireworks.