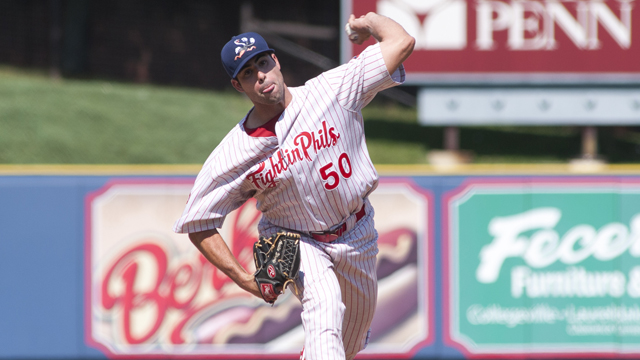 Anderson is a familiar name in the Phillies organization, but not as a position player. The 6'3" righty has spent the last two seasons pitching in the Gulf Coast League, Williamsport (A-), and Lakewood (A) where he accumulated a 12-9 overall record in 34 games. Over 148.2 innings pitched, he had a 49/122 walk to strikeout ratio-with one intentional walk-and a 2.97 ERA. Despite this being his first year playing shortstop, the Reno, Nev. native played outfield in high school.

A 2012 graduate of Southern Illinois University Carbondale, Forsythe spent 2014 in Lakewood (A) and Clearwater (A+) going 5-5 with a 2.35 ERA, and earned a spot in the Class A South Atlantic League All-Star Game. As a Saluki, he was a 2x MVC Pitcher of the Week, and is the all-time leader in games started (49) and innings pitched (346.2).

The next game for the Phillies Double-A Spring Training squad is Monday afternoon when they take on the Yankees. First pitch is scheduled for 1 P.M. at Clearwater's Complex Center.