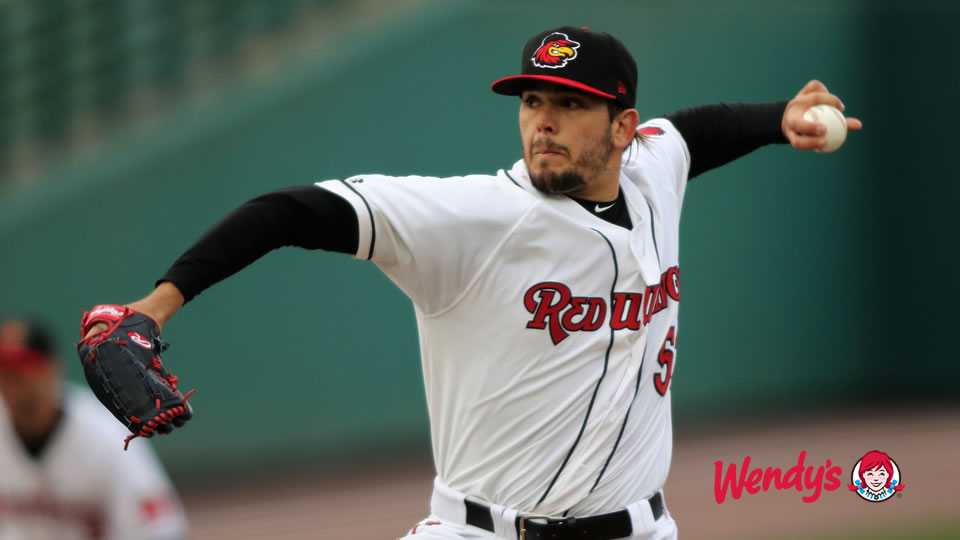 The Rochester Red Wings edged the Syracuse Mets 5-4 Wednesday afternoon at Frontier Field. The Wings head to Lehigh Valley for a road series that begins Thursday, and return home to host Scranton/Wilkes-Barre (Yankees) on Monday, April 22 at 6:35 p.m.

Red Wings starter Lewis Thorpe was dominant in the early innings. After striking out the first seven batters he faced, Thorpe ran into some trouble in the third. With two Mets runners in scoring position, the left-hander got out of the jam on a groundout by Danny Espinosa, keeping the game scoreless. .

The Wings broke the 0-0 tie in the bottom of the fourth inning, getting to Syracuse starter Chris Mazza. After LaMonte Wade Jr. was hit by a pitch, the Wings rattled off three straight singles. Randy Cesar's two-RBI single plated Wade and Wilin Rosario and giving Rochester a 2-0 lead.

Thorpe continued to rack up strikeouts on the mound in the fifth, picking up his 10th and 11th of the afternoon.

Rochester extended their lead in the fifth, on a Luke Raley two-run home run to right-center field, making the score 4-0. The home run was Raley's second of the season.

Syracuse cut into Rochester's lead in the sixth. After a two-out single by Adeiny Hechavarria, Travis Taijeron hit a two-run home run off the left field scoreboard, making the score 4-2. Thorpe exited after the homer, lasting 5.2 innings, giving up four hits and two earned runs, walking one and striking out 12 Mets. Thorpe kept his command, throwing 64 strikes out of 94 pitches.

Andrew Vasquez came in to relieve Thorpe, giving up one walk before striking out David Thompson to end the inning.

Rochester made a call to the bullpen in the top of the seventh, bringing in Austin Adams with two on and only one out. Adams worked around a walk and and fielding error that allowed a run to score, then struck out Taijeron to end the threat.

Vasquez exited with 0.2 innings pitched, giving up one hit, an earned run, and two walks while striking out one.

The Mets tied the game at 4-4 in the top of the eighth inning, when David Thompson hit a one-out solo homer off Adams.

The Wings responded when Rosario hit an 0-1 pitch from reliever Eric Hanhold into the left field bullpen, putting the Red Wings back on top 5-4. It was the team-leading fourth homer of the season for Rosario.

Adams worked 1.2 relief innings, giving up two hits and an earned run with a walk and two strikeouts. Preston Guilmet pitched the ninth inning, allowing just an infield hit and striking out Taijeron to end the game.

VISUALS FROM THE BALLPARK

THIS DAY IN RED WINGS HISTORY

THIS DAY IN INTERNATIONAL LEAGUE HISTORY

1942 - The International League attracts 77,222 paying customers for Opening Day across the League, led by a tremendous turnout in Jersey City. Roosevelt Stadium, which only holds 25,000 seats, welcomes 55,218 fans in and around the ballpark. A gathering of musicians and carnival amusements turns the game into an unofficial holiday in Jersey City, where one year earlier the Giants established a new Minor League attendance record by drawing 56,391 fans for their home opener against Rochester. Jersey City would enjoy a great season in 1942, advancing to the Governors' Cup Finals before losing to Syracuse 4 games to 0.