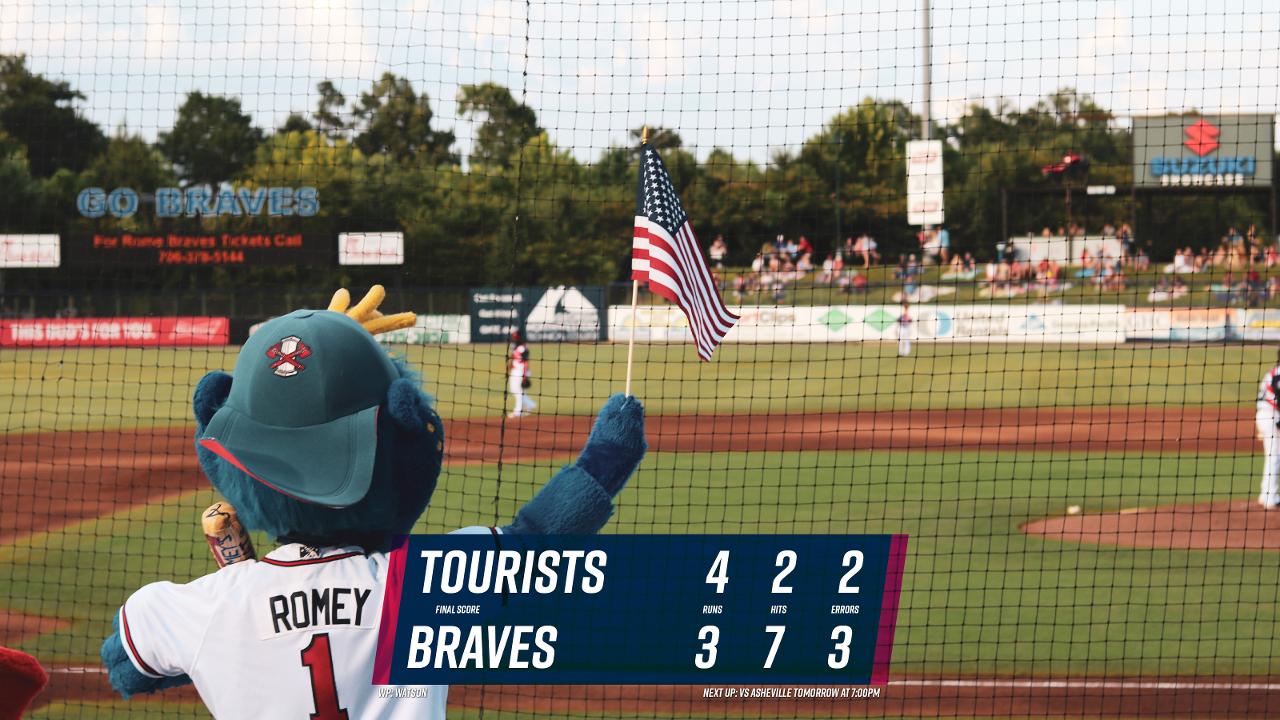 Rome was unable to make a winner of LHP Gabriel Noguera in what was perhaps his best performance of the season. The Venezuelan left-hander struck out a career-high nine batters and allowed only one hit in 6.2 innings of work. He surrendered no earned runs and received a no-decision.

Playing in front of more than 5,100 fans the Braves and Tourists settled into an early pitcher's duel as Noguera and Asheville starter LHP Nick Bush put up zeroes. Asheville didn't get its first hit until the 5th inning when they were primed to exploit an error. After the leadoff man reached on an errant throw, Tourists shortstop Coco Montes hit a double into right center to score the first run of the game. Another run came in on a wild pitch making it 2-0 in favor of Asheville.

Bush had retired 13 consecutive Rome batters at one point until Ariel Montesino broke the hurler's rhythm in the 6th inning with a shot into right field. He would later score when Justin Dean reached on an infield hit and subsequent throwing error. The tying run crossed on a Greg Cullen RBI single up the middle.

Still tied up 2-2 in the 7th Rome got its only lead of the night on a bases-loaded walk to Dean, allowing Griffin Benson to score. Leading 3-2, the Rome bullpen would find immediate trouble in the 8th inning. A walk and a throwing error brought in the tying run. Cleanup man Willie MacIver roped a single into left to bring in the go-ahead tally and the Braves trailed 4-3.

Rome would get close in the 9th. Drew Campbell reached on a single and Montesino got on base thanks to a throwing error. With the tying and winning runs both in scoring position the game ended on a strikeout.

Dean extended his hitting streak to 12 games. Rome pitchers struck out 13 Tourists batters and did not allow an earned run. They surrendered two hits.