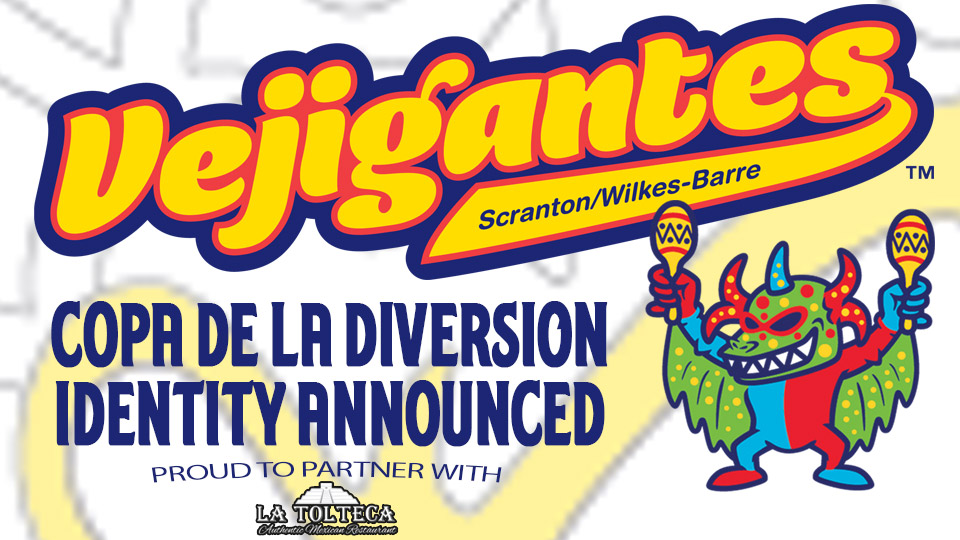 MOOSIC, PA (March 18, 2019) -- The Scranton/Wilkes-Barre RailRiders are excited to announce that for six games during the 2019 season they will be playing as the Scranton/Wilkes-Barre Vejigantes. This is the first year the RailRiders participating in Minor League Baseball's Copa de la Diversión® (Fun Cup™) that now includes 72 teams across the country playing nearly 400 games under Latinx identities.

"We could not be more excited to be involved in such an important and fun initiative with Minor League Baseball," said Josh Olerud, the RailRiders President and General Manager. "We recognize how important it is to involve all Northeast Pennsylvania residents at PNC Field and we know that participating in the 'Copa de la Diversion' is a small first step in what will be a lasting effort to connect with our local Hispanic community."

The cornerstone of MiLB's U.S. Hispanic/Latino fan engagement initiative, Copa de la Diversión established an innovative new platform authentically connecting MiLB teams with their diverse communities, embracing the culture and values that resonate with most Hispanics/Latinos nationwide. Teams participating take on new identities for select games during the course of the season, donning unique uniforms and altering their brand to pay tribute to this heritage.

A "Vejigante" is a folkloric masked character, boasting roots from a wide spectrum of cultures. The eccentric jester-like Vejigante is often characterized during Carnival and other celebrations, engaging in mischievous and entertaining antics alike. Scranton/Wilkes-Barre adopted the moniker to unite the region's growing Latinx population. The RailRiders will reveal the Vejigantes uniforms as part of the Meet the RailRiders event April 2 at the Hilton Scranton and Conference Center.

These six games throughout the season will each be specifically themed, featuring matching live music and in-game entertainment:

Plans also include a Luis Severino Bobblehead giveaway June 22, presented by Dickson City Hyundai and a Food Truck Festival featuring local food vendors showcasing their best dishes at PNC Field July 21. The day of the Scranton Latin Festival will cap the giveaway season with a Gary Sanchez bobblehead, presented by Geisinger. The former RailRider will be wearing a Vejigantes-themed catcher's mask.

The biggest fanfare of any of the games might July 16 when Roberto Clemente's No. 21 will be retired at PNC Field. That night, the first 500 children 12 and under will receive a commemorative Roberto Clemente replica t-shirt presented by La Tolteca.

"The growth we're seeing in team participation for Copa is outstanding," said Kurt Hunzeker, Vice President of Marketing Strategy and Research for Minor League Baseball. "We like to say that you don't attend a Minor League Baseball game, you feel it. To extend that feeling to a previously underserved fan base is remarkable."

The RailRiders are proud to partner with La Tolteca for their 2019 Copa de la Diversión initiative.