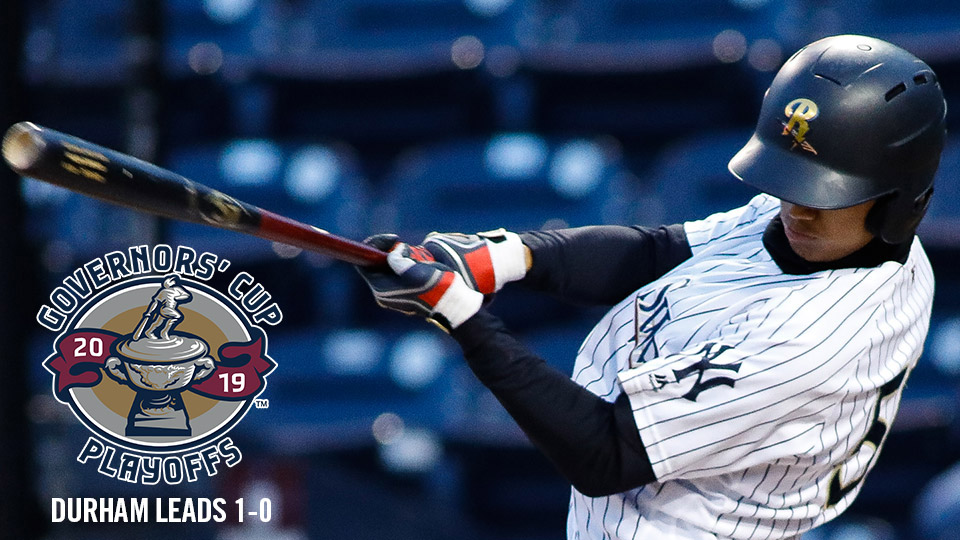 Gosuke Katoh went 2-for-4 with a double and a home run, but the RailRiders fell 9-3 in the first round opener on the road. (Tim Dougherty)

DURHAM, NC (September 4, 2019) - A close game through the middle innings on a pre-hurricane evening at Durham Bulls Athletic Park, the Durham Bulls took Game One of the International League Semifinals Wednesday night from the Scranton/Wilkes-Barre RailRiders, 9-3.

The RailRiders fell behind early as the first three Durham batters of the night reached against starting pitcher Brian Keller. A run was home in the bottom of the first inning before Keller settled in, retiring the next 12 batters he faced in order. That took the game into the fifth inning, by which time the RailRiders had struck for a game-tying run.

Jose De Leon got the ball at the outset for Durham and posted three scoreless innings to begin things while working around three hits. On one of his first offerings of the fourth inning to Erik Kratz, he allowed the veteran catcher to drill a ball to right-centerfield for a solo home run. Kratz proved to be the hero in Tuesday's improbable 14-13 comeback victory over the Syracuse Mets in the one-game playoff to decide the I.L. North Division, and his swing got the RailRiders back on even footing.

From there, the Bulls scored a go-ahead run in the fifth inning when Kevin Padlo belted a homer over the 32-foot high Blue Monster wall in left-centerfield to make it 2-1. The following frame, Keller allowed a pair of walks with one out before giving way to Kaleb Ort. Jason Coats was the first man to greet the righty and he scorched a home run to make it 5-1, en route to a 9-3 win and a 1-0 series lead for the Bulls.

The RailRiders and Durham Bulls hit the pause button Thursday before resuming action Friday night at Durham Bulls Athletic Park with a 6:05 p.m. first pitch scheduled for Game 2. Pregame coverage begins at 5:35 p.m. on the RailRiders Radio Network with Adam Marco and Adam Giardino with RHP Brody Koerner (4-6, 5.63) taking the ball against RHP Josh Fleming (1-3, 5.14). After the first two games down south, the series flips back north to PNC Field for Game 3 Saturday night at 6:35 p.m.