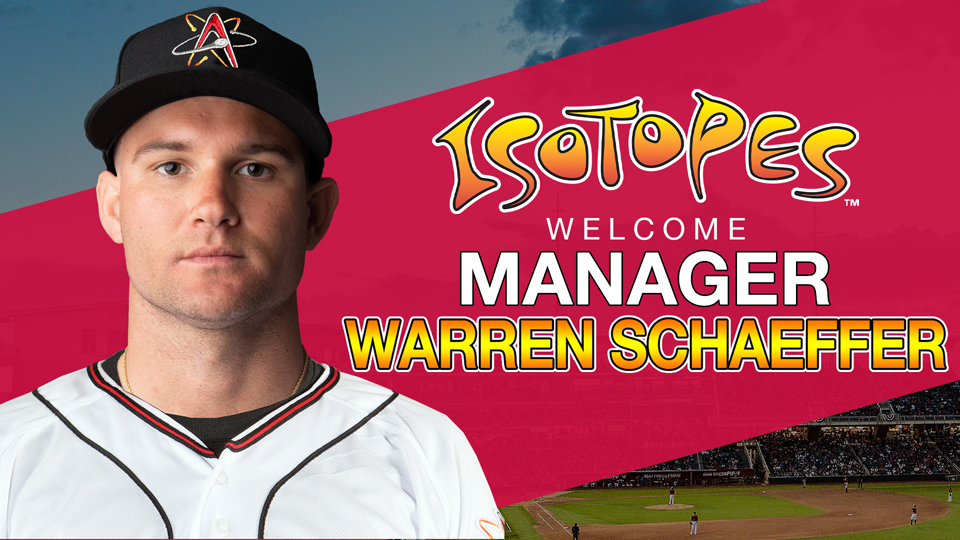 The Albuquerque Isotopes have announced Warren Schaeffer as the club's manager for the 2020 season. The upcoming campaign will mark Schaeffer's eighth in the Rockies organization after serving as Double-A Hartford's skipper the past two years.

The 34-year-old has a 344-347 record over his five-year career at the helm, a winning percentage of .498. Schaeffer started his managerial tenure with the Single-A Asheville Tourists from 2015-17. In his first season with Ashville, he guided the Tourists to the South Atlantic League Championship Series.

Schaeffer had a .500 winning percentage in his two years with Hartford including a 73-66 record in 2019.

The Western Pennsylvania native began his coaching career in 2013-14 as a hitting coach for Short-Season Tri-City in the Northwest League.

Schaeffer compiled a .214 average, 161 runs scored, 137 RBI and had a .971 fielding percentage at shortstop over his career.

Schaeffer and his wife, Callie, have two children, Beauman and Emerson, and reside in Asheville, N.C. He graduated from Greensburg Central Catholic High School in 2003 in Greensburg, Penn. The Virginia Tech University alumni was the starting shortstop for the Hokies from 2004-07 and received Atlantic Coast Conference All-Academic Team honors in 2006.

The rest of the Isotopes coaching staff will be announced at a later date.

The Isotopes open up the 2020 campaign with a five-game series against the Las Vegas Aviators on April 9 and return to Isotopes Park for the Home Opener on April 14 vs. the Salt Lake Bees.