Oliva named MVP, Sulser and Vasquez selected as Co-Pitchers of the Year 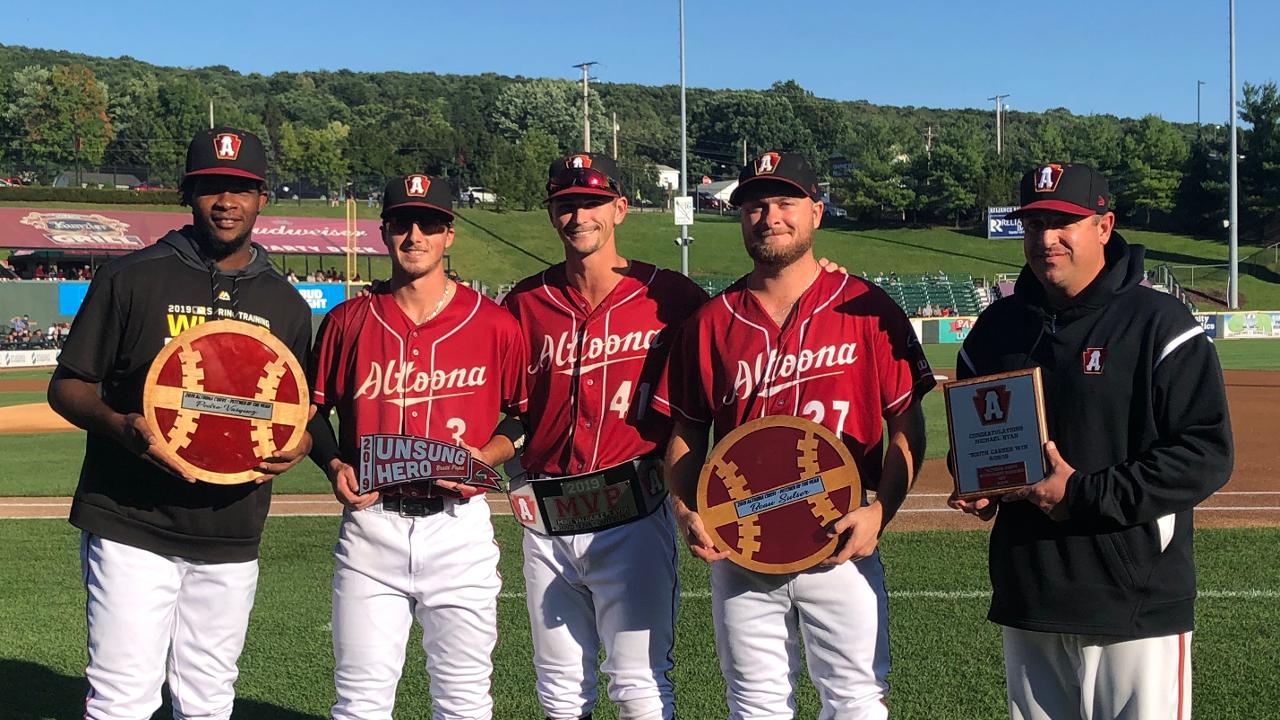 CURVE, Pa. - The Altoona Curve, Double-A affiliate of the Pittsburgh Pirates, announced their 2019 team awards on Thursday at Peoples Natural Gas Field. Outfielder Jared Oliva was selected as the team's Most Valuable Player while right-handers Pedro Vasquez and Beau Sulser were named the team's Co-Pitchers of the Year.

Additional award recognition included infielder Brett Pope as the club's Unsung Hero and closer Matt Eckelman as the Fireman of the Year.

This year's Altoona Curve Most Valuable Player Jared Oliva leads the club with 38 multi-hit games and is currently ranked third in the Eastern League with a .284 batting average. He also stands ninth in the E.L. in OPS (.769), sixth in on-base percentage (.360), fifth in hits (122), tied for fourth in triples (6) and fourth in runs (70). His 35 stolen bases are also second in the league and are a new career-high total. Oliva was batting .188 through June 2 but has hit at a .336 pace ever since.

Defensively, Oliva has been the top outfielder in the Eastern League with a perfect 1.000 fielding percentage in 109 games and 288 total chances. Oliva has played the most games with the most total fielding opportunities without an error committed among all outfielders in Minor League Baseball. He could become just the second Curve outfielder to finish with a perfect fielding percentage (minimum 75 games played) in team history, joining Darren Burton in 2000.

Oliva was also chosen as one of three outfielders on the E.L.'s End-of-Season All-Star Team.

"You look at the start he got off to offensively, for someone to grind through that and continue to put the work in and have such a successful season, just shows you the type of person that he is," said Curve manager Michael Ryan. "He learned a lot about himself this year and what it means to be an all-around player. It's a perfect choice for MVP."

Co-Pitcher of the Year Pedro Vasquez was honored as an Eastern League Mid-Season All-Star this year, the second mid-season nod of his career, and pitched a perfect third inning in the E.L. All-Star Game. He currently ranks fourth in the league with a 2.79 ERA, sixth with a 1.11 WHIP, ninth at a .237 batting average against and tied for 10th with a team-best eight wins. Vasquez is on a short list of Curve pitchers to compile at least 100 innings pitched with an ERA under 3.00 and the first since 2015 Altoona Curve Pitcher of the Year Chad Kuhl (2.48 ERA in 152.2 innings).

"When he showed up to spring training, we knew we had a different guy than last year," said Ryan. "Just the way the ball was coming out and the way he worked so hard at his secondary pitches was a big reason why he was successful this season. He is really showing what the organization thought they got when they traded for him. Health is a huge thing with him and to watch him go through the whole year every fifth day is a big deal for him."

Co-Pitcher of the Year Beau Sulser was also an Eastern League Mid-Season All-Star in 2019, the first all-star honor of his career, and retired both hitters he faced in the E.L. All-Star Game. He is tied for 10th in the league with eight wins while his 2.60 ERA ranks fourth among E.L. pitchers with at least 80 innings pitched. He held a variety of roles on Altoona's pitching staff from pitching in long relief to making spot starts. He pitched multiple innings 28 times and provided scoreless relief 18 times, including each of his first eight Double-A games.

"He got an opportunity to come up a level and became the guy that we relied on the most," said Ryan. "Whether going into the rotation or cleaning up some long appearances out of the bullpen, he just got into a groove that he was putting up zeroes after zeroes up. Then when you thought he was going to give up a run, his stuff came out. He is so intelligent on the mound that he was able to get himself out of some second-and-third, no-out situations that really saved our bullpen. He's been outstanding all year."

2019 Altoona Curve Unsung Hero Brett Pope is in his first Double-A season and has taken on a bigger role with matched performance as the season progressed. Since May 25, Pope has raised his batting average from .169 to .249 by hitting .286 and has reached base at a .351 rate. He batted .281 since the start of the Second Half and has played all over the infield with starts at second base, shortstop and third base in addition to five different spots in the batting order.

"What he had to go through this year, not a lot of players would have had success," said Ryan. "It was a surprise that he made the Double-A team out of spring training. He had to learn on the fly after basically skipping a level. And then to go from not getting a lot of playing time at the beginning of the year to being an everyday guy at the end shows you the type of player he is and the work ethic he has."

2019 Altoona Curve Fireman of the Year Matt Eckelman has rocketed up the all-time saves list with 23 more this season, the fourth-highest single-season total in team history. His saves total leads all Pirates minor league pitchers and ranks second in the Eastern League. He ranks also holds a 3.33 ERA and ranks third in the league with 45 appearances while the Curve have gone 34-11 in games he has pitched. Combined with his 11 saves in 2018, Eckelman's 34 career saves for the Curve are second-most in club history and he set a franchise record when he converted 26 successful save chances from August 3, 2018 through July 17.

"When you give the ball to a guy out of the bullpen and you the see the belief in their eye, as a manager that makes you feel really comfortable," said Ryan. "We knew exactly how that inning was going to go every time we gave him the ball. That's how much we trusted him."

The players were honored during a pregame awards presentation during the Curve's final home game on Thursday at PNG Field.

The Altoona Curve, 2010 and 2017 Eastern League Champions, have been the Double-A affiliate of the Pittsburgh Pirates since 1999. For tickets or more information, visit AltoonaCurve.com, call 877.99.CURVE or stop by the PNG Field box office. Additionally, the Stockyard Team Store is open Monday-Friday from 9 a.m. to 4 p.m. on non-gamedays and online 24/7/365.