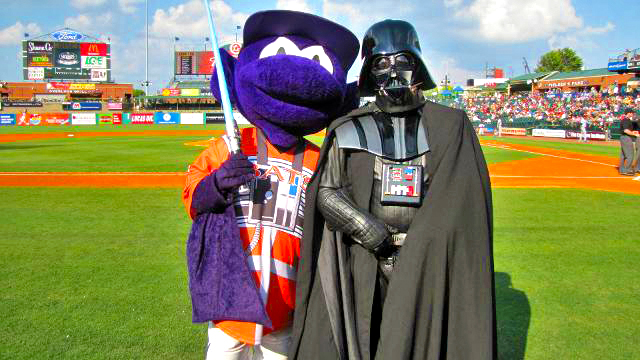 Each season the Louisville Bats play 72 home games at Louisville Slugger Field. For everyone it isn't possible to attend all of them because of other obligations and we understand that.

As we sit in the office we want to think of warm thoughts and that involves baseball that will begin here at LSF very soon. Pitchers and catchers have already reported, so baseball will be here before you know it. Here are the 15 can't-miss dates for the 2015 season, all of them involving a great promotion.

If you attended last year you know it was a great event for the entire family. If you missed it, you sure don't want to miss it again this year, so mark your calendars. The team will have Star Wars-themed jerseys and it's on a Saturday, so bring out the whole family for this unique night at the ballpark. | Buy Tickets

Feel free to dress up as your favorite superhero and have a chance at a prize on our Superhero Night presented by KFC! The players and coaches will wear Batman themed jerseys for this game. | Buy Tickets

The Louisville Bats will have our first ever Star Trek Night, this one coming on August 1. Come out and enjoy the Star Trek themed sights and sounds and you can also dress up as your favorite character for a chance to win prizes. Again the Bats will wear themed jerseys. | Buy Tickets

College students will have their own night in 2015. Each student will get a $3 discount on tickets with a valid student ID. Also the first 1,500 through the gates will receive a free koozie featuring the Bats logo, brought to you by the University of Louisville College of Business. | Buy Tickets

Halloween Night is back at Louisville Slugger Field! Kids (12 and under) who wear a costume will gain free entry into the ballpark. Bring out the kiddos and wear your favorite Halloween costume and trick-or-treat on the concourse of the stadium visiting a variety of our sponsors tables. | Buy Tickets

Rounding out the theme nights will be Frozen Day. The hit movie will have it's own night here at the ballpark on Sunday April 19. Bring the kids out to the yard, as we will also have the Kids Inflatable FunZone and Kids Run the Bases and you can come to the ballpark and "Let it Go". | Buy Tickets

If you were here last season for the Jay Bruce Stein you sure don't want to miss a chance to add to the collection. Come out and enjoy dollar beers from 5:30-7:00 p.m. with your Johnny Cueto Stein! | Buy Tickets

Bobblehead nights are huge with fans and we will have three of them this season. The first will be on the first Saturday of the season and it will be a mystery bobblehead. The first 1,500 fans will receive one for free as they enter the gates. | Buy Tickets

Devin spent the 2011 season here in Louisville and you can see him once again in a Bats uniform on June 13. Come and get his bobblehead and put it in your shelf with all of your other Louisville Bats bobbleheads over the years! The first 3,000 fans will get the bobblehead presented by Pepsi. | Buy Tickets

Come out to the ballpark and get your Reds Face of MLB winner Todd Frazier's bobblehead. He sported a Louisville Bats uniform in both 2010 and 2011 and you have a chance to see him in one again. The first 3,000 fans into the ballpark will receive the bobblehead presented by Texas Roadhouse. | Buy Tickets

A big day each year is Thunder Over Louisville, this season it's on Saturday, April 18. You can spend the entire day at the ballpark and is an excellent deal for all fans. The Bats will play at 2:00 p.m. and will be followed by a concert on the field, with the finale of the fireworks going off at 9:30 p.m. Get your tickets and not have to fight the crowds at the Waterfront, also enjoy clean restrooms and concessions throughout the day until the fireworks conclude. | Buy Tickets

One of the favorite things for kid's to do at the ballpark is go to the concession stand. Well, this season kid's 12 and under eat for free on Sunday's. Each child will receive a hot dog, junior nacho and small soda with a paid admission to the game. Also every Sunday is the Inflatable FunZone and Kids Run the Bases, so you sure don't want to miss a Sunday home game this season.

One of the best days of the year here at the ballpark is Military Appreciation Day. To honor those who have served our country throughout the years, all veterans, active duty military, military family members, reservists and national guardsman will be admitted free of charge. Valid ID is required. | Buy Tickets

A special July 3rd Zambelli fireworks show will take place following the game. It's a Friday night so bring out the entire family and enjoy a night of baseball and fireworks! | Buy Tickets

The regular season will be coming to an end and the final fireworks day of the season will be on September 6. Come out and enjoy a ballgame on a Sunday evening and watch the fireworks after presented by LG&E. | Buy Tickets

That will do it for our 15 can't miss dates, you can go see the entire list of promotions here and be sure to buy tickets for your favorite promotions! Stay warm and get ready for some baseball!