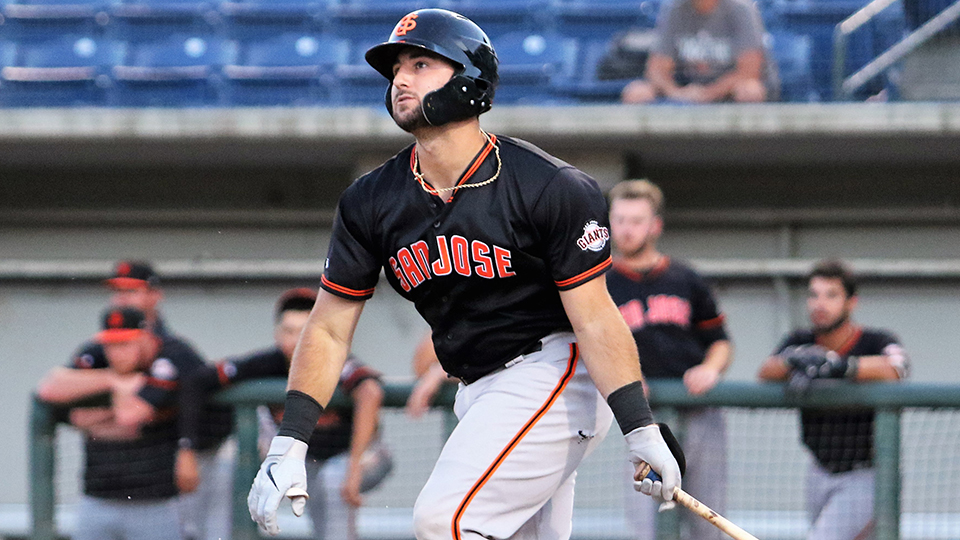 Fresh off a seven-year run that featured three World Series championships and four playoff appearances, the Giants have fallen back in the National League West. However, there is a silver lining to those recent struggles and it resides in San Francisco's Minor League system.

Led by the club's top prospect Joey Bart and second-ranked Heliot Ramos, the future looks bright in the Bay Area -- but it doesn't stop there. The duo have been joined on MLB.com's list of Top 100 prospects by shortstop Marco Luciano (61) and outfielder Hunter Bishop (65), with several more names knocking on the door.

San Francisco's eight domestic affiliates posted a collective .516 winning percentage, with five reaching the playoffs and Triple-A Sacramento winning the Pacific Coast League and Triple-A championships. Despite the recent struggles at the Major League level, there's an air of optimism that a new generation of talented Giants soon will reach Oracle Park.

"I think our fans are excited to see some young players," Giants director of player development Kyle Haines said. "Guys like Joey and Heliot stand out, but they're not the only ones. In general, fans are happy and eager to watch energetic players that want to win come through the Minors."

Catcher -- Joey Bart, San Jose (57 games), Richmond (22 games): The crown jewel of the system showed why he's ranked 19th among on the Top 100 Prospects list. Bart posted a .924 OPS with 16 homers and 48 RBIs across 79 games in what was supposed to be his first full Minor League season. Instead, the 22-year-old was limited to 313 at-bats after a pitch broke his left hand in mid-April, costing him six weeks. The second overall pick in the 2018 Draft showed no ill effects upon his return and reached Double-A barely 13 months after turning pro.

The backstop continued his onslaught in the Arizona Fall League, where he batted .345/.513/.793 with four homers and 10 RBIs before suffering a fractured right thumb when he was drilled by a pitch. The Georgia Tech product is expected to be fully healed and ready to go by Spring Training.

"Of everything he's done so far, handling the pressures of being a high Draft pick and the expectations that come with that is probably the most impressive thing," Haines said. "Everyone knows how good his bat is and can be, but he's made great strides behind the plate, which is very encouraging. He's got a good chance to be a terrific all-around player and a true difference-maker."

First baseman -- Frankie Tostado, Augusta (128 games): Tostado isn't mentioned among some of the Giants' higher-profile prospects, but that could change soon. Playing in his first full season nearly two years after he was drafted, the 21-year-old produced at a level that merits close attention. Tostado made the jump from the Rookie-level Arizona League to the Class A South Atlantic League and hit .259 with a .740 OPS in 128 games. The California native was consistent all year and finished second in the organization with 85 RBIs and fifth with 18 homers. Tostado played the majority of his games (99) at first, but also made 13 appearances in the outfield.

Second baseman -- Kyle McPherson, San Jose (113 games): The Giants have brought McPherson along slowly after they selected him in the 26th round of the 2017 Draft. The 23-year-old spent all but one game with Class A Short Season Salem-Keizer in 2018 and moved on to Class A Advanced San Jose this year with mixed results. The James Madison product batted .254/.328/.332 in 113 games, but showed good plate discipline with 38 walks. He finished strongly, hitting .288 in 94 at-bats in August.

Third baseman -- Zach Green, Sacramento (72 games), San Francisco (eight games): Signed as a Minor League free agent in January 2019, Green made his first year in orange and black his best in baseball. The 25-year-old ended his tenure with the Phillies as a 2018 Organization All-Star and carried that success to the West Coast. Green slugged a career-high 25 roundtrippers, recording five multi-homer games, drove in 64 runs and batted .282/.380/.659 in 72 games, despite missing nearly six weeks due to two separate stints on the injured list. He earned his first cup of coffee in the Majors, but suffered a hip injury and did not play after Aug. 15.

Shortstop -- Marco Luciano, AZL Giants Orange (38 games), Salem-Keizer (nine games): The rise of Luciano, the organization's third-ranked prospect, is no fluke. Despite playing his debut season at 17 years old, the native of the Dominican Republic flashed five-tool potential in 2019. Luciano tore through the AZL with a .322/.438/.616 slash line, 21 extra-base hits and 38 RBIs in 38 games. He earned a promotion to the Class A Short Season Northwest League and appeared in nine regular-season games with the Volcanoes.

Considered by many scouts to be the best all-around hitter in the 2018 crop of international signees, Luciano possesses tremendous bat speed, has a mature approach at the plate and uses the entire field with ease. Although there is some question as to whether he'll outgrow the position thanks to a 6-foot-2, 178-pound frame that has yet to fill out, his arm is strong enough to handle shortstop and his athleticism lends itself to a move elsewhere if the need arises.

"Marco showed tremendous aptitude and maturity for someone so young," Haines said. "His offensive tools definitely play up, and unlike many kids who fall into a 'swing-at-anything' mode, he takes pride in going after quality pitches within the zone. We're very excited to see his progress moving forward, but we also don't want to judge his success on such a small sample size. He'll need to go through the ups and downs like all players do, but we're confident his season was a sign of things to come."

Heliot Ramos, San Jose (77 games), Richmond (25 games): While Bart deservedly gets much of the attention as the Giants' top prospect, Ramos has shown why he's a close second. An inconsistent season a year ago as an 18-year-old in the South Atlantic League morphed into something special this summer. Ramos put everything together in 2019, batting .290/.369/.481 with 41 extra-base hits -- including 16 homers -- and 55 RBIs in 102 games. A sprained knee ligament sidelined him for more than a month but only temporarily slowed his breakout season. The Puerto Rico native participated in his second straight Futures Game and moved a step closer to San Francisco with a late-season promotion to the Double-A Eastern League.

"Heliot did an excellent job of swinging at pitches he could do damage with," Haines said. "He's got power to all fields and considering his age and relative inexperience, that speaks volumes. Defensively, he's played a strong center field and you can see his overall game coming together nicely. He's young, but we feel like we've given him what he can handle and he's passed each test so far."

Chris Shaw, Sacramento (75 games), Richmond (45 games), San Francisco (16 games): Selected as an Organization All-Star for the fifth consecutive year, Shaw has little left to prove in the Minors. The 26-year-old topped the 20-homer plateau for a fourth straight season and finished with career highs of 28 long balls and 94 RBIs in 120 games. Surprisingly, the Massachusetts native began the year in Double-A after splitting 2018 between Triple-A and the Majors, but he didn't let the assignment affect his game. Shaw was back in the Pacific Coast League by the end of May and in the bigs in September. The Giants' No. 21 prospect will bring a .279 career average and .820 OPS into 2020.

Alexander Canario, Salem-Keizer (49 games), AZL Giants Orange (31 games): Canario rounds out a strong outfield following a terrific all-around season. San Francisco's No. 7 prospect ranked sixth in the system with 16 homers, despite playing only 59 games. Overall, the 19-year-old batted .318 with a 1.000 OPS, 38 extra-base hits and 54 RBIs. Signed in 2016 out of the Dominican Republic, Canario has arguably the best bat speed in the organization and a plate approach that belies his teenage status. Listed at 6-foot-1 and 165 pounds, the right-handed bat and glove transitioned from right to center field in 2019 with encouraging results.

"Just an overall great year from a player on the rise. Even competing in short-season competition, he put up full-season numbers," Haines said. "On the defensive side, Alexander showed improvement and really played a nice center field. Like Ramos, we feel he has the potential to be a special player and it's been a treat to watch him develop to this point."

Designated hitter -- Mike Gerber, Sacramento (119 games), San Francisco (12 games): Like many of the veterans who contributed to the River Cats' championship season, Gerber ended the year with career highs virtually across the board. A year after making his big league debut with the Tigers, the 27-year-old signed with the Giants and led the organization with 26 homers while placing third with 83 RBIs. Overall, he batted .308/.368/.569 and shared the Minor League lead with a career-best 41 doubles.

"Matt had an incredible year, top to bottom," Haines said. "He throws a ton of strikes, but even doing so, he doesn't get hit much. The strikeouts are impressive and doing what he did in the [Cal League] really raised a lot of eyebrows. He was a successful pitcher in college and it's great to see that talent translate to the pro game."

Left-handed starter -- Seth Corry, Augusta (27 games, 26 starts): The odds that Corry is still ranked the system's ninth-best prospect as 2020 draws closer are remote. The 21-year-old had one of the most dominating seasons by any Minor League pitcher in 2019. Corry led the Sally League -- and the organization -- with 172 strikeouts while limiting opponents to a Minor League-best .171 average across 122 2/3 innings. The Utah native used a devastating curveball to complement a fastball that sits consistently in the low-90s but can top out at 96 mph to string together 32 consecutive scoreless innings in the heart of the summer. Unsurprisingly, Corry was named the circuit's Most Outstanding Pitcher.

"Early in the year, nobody was hitting Seth. He was just too good for the league," Haines said. "Most of the damage he incurred was self-inflicted. In the second half, he cut his walk rate drastically, and when you combine that with his stuff, it makes him virtually unhittable. We weren't sure how he'd respond to a full season of pitching. The jump from 70-something games to 140 is a big leap, but he handled it well, to say the least."

Relief pitcher -- Sam Selman, Sacramento (39 games, one start), San Francisco (10 games), Richmond (four games): Everything came together for Selman in 2019. The Royals' second-round pick in 2009 was a dominant force out of the bullpen and was rewarded with his first trip to the Majors. Selman sported a 1.80 ERA and a 0.82 WHIP while averaging 15.4 strikeouts per nine innings and fanning 94 of the 211 batters he faced over 55 frames. The 29-year-old held foes to a .146 average and compiled a 4.35 ERA in 10 big league appearances.