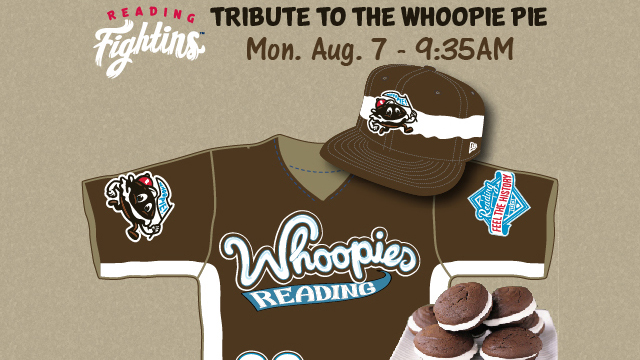 (Reading, Pa.) - The Reading Fightin Phils will be celebrating a traditional dessert of their region this season in their 16th Annual Morning Game on Monday, August 7th at 9:35 a.m. by wearing custom-made uniforms that resemble Whoopie Pies. The team will effectively switch their name for one day, and play as the Reading Whoopies vs. the Akron Rubber Ducks. The first 2,000 adults will receive Whoopie Pies thanks to BARTA. In addition, the first 2,000 adults will also receive an America's Classic Ballpark Seat Cushion. Plus - for the special morning game, all fans that enter the stadium before 8AM will receive a free hot dog and coffee, also thanks to BARTA.

While other regions may claim the Whoopie Pie as their own, the Whoopie Pie is believed to have originated in Pennsylvania's Americana Region. They were created by the area's Pennsylvania German communities and have been handed down from generation to generation. Whoopie pies are actually more like a sandwich, made of two cake-like cookies with a cream center.

The Reading Whoopies players will be wearing Whoopie Pie inspired uniforms for this special event. The hats are designed to look like a giant Whoopie Pie with chocolate brown panels and a stream of delicious white cream in the middle. A "Joyful Whoopie Pie" mascot is printed on the front wearing a red Fightin Phils baseball cap with the old-school "R" logo.   The Whoopie Pie mascot is also carrying a flag that states the word, "Whoopie!" This celebrates the local legend that when children would find Whoopie Pies in their lunches they would all shout, "Whoopie!" Like the Whoopie Pie caps, the jerseys will be chocolate brown in color, with "Whoopies" written in cream filling across the chest.

The 16th Annual Morning game will also feature the traditional stroll around the warning track beginning at 8:30 a.m. There will also be a Kegs and Eggs Beer Tasting Festival at the Deck with Fightins Craft Beer Partners thanks to DeWalt Brewing.

America's Classic Ballpark is proud to be a part of Pennsylvania's Americana Region. Season tickets for the 2017 season are available online at Fightins.com, by phone at 610-370-BALL, and in-person at FirstEnergy Stadium. Follow the Fightin Phils on Twitter at @ReadingFightins and like them on Facebook via www.facebook.com/fightins.