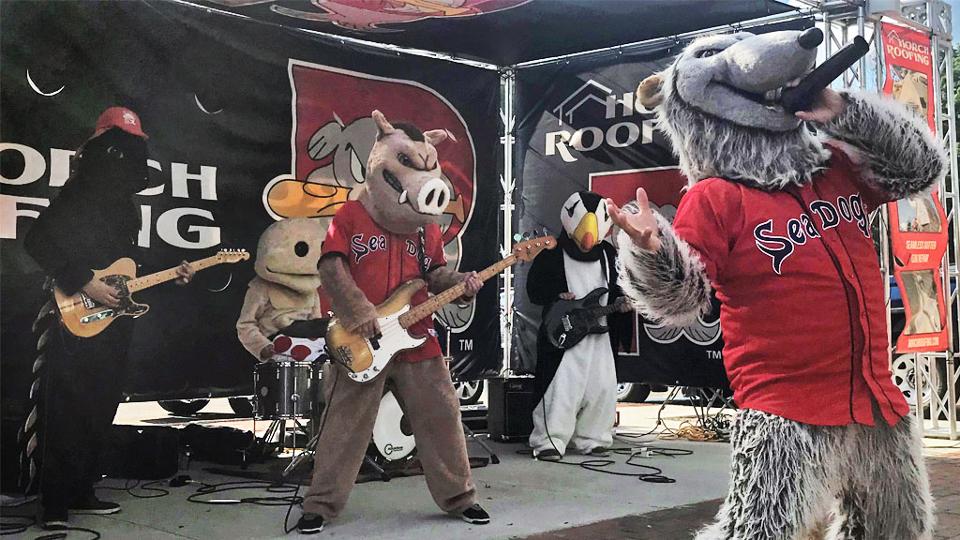 The Kastaways "returned" to Portland's Hadlock Field in 2012 to perform pregame concerts on the front plaza.

PORTLAND, Maine -- On the night of the Double-A Sea Dogs' penultimate Saturday home game, a name fondly remembered in New England cackled through the speakers on the Hadlock Field front plaza.

Anyone who looked around expecting to see the iconic two-time All-Star of the parent-club Red Sox wouldn't have found him, but disappointment soon gave way to -- at a minimum -- surprise.

It belonged Sir Nigel Rathbone III, the frontman -- er, front wharf rat -- of The Kastaways, a band composed of mascots rejected as the face of the franchise when the Portland ballclub debuted as a Marlins affiliate in 1994. Rathbone (vocals), Herman the Power Hog (bass), Clarence the Clam (drums), Pete the Puffin (keyboards, guitar) and Spike the Porcupine (guitar, occasional keyboards) stood on the plaza ready to rock in front of fans waiting to enter the ballpark.

Video: The Kastaways rock out before a Sea Dogs game

According to the band members, when a name-the-team contest christened the Portland club the Sea Dogs and made Slugger their mascot, the also-rans realized they shared a love of rock 'n' roll and formed a quintet. Rather than wallow in the sting of not being chosen to represent Maine's only Minor League Baseball team, they left town to make their way in the world as musicians. Their talent, the tall tale goes, took The Kastaways on a tour of Eastern Europe and Eurasia, where they listened to Red Sox broadcasts via a transistor radio between shows, until returning to Maine in 2012. At that point, they accepted a gig playing in front of Hadlock Field before Saturday home games.

"We hadn't been back in Portland since 1994. We hadn't seen Slugger, so we were a little worried about how that would go down," Rathbone said. "But he's been awesome. He comes out most games and dances with us. No hard feelings.

"You've got to check your ego at the door when you've been playing Turkmenistan for 15 years."

Whatever the fictitious characters of The Kastaways really did between their loss in the name-the-team contest all those years ago and their reemergence as a pregame band in 2012 is anybody's guess. It's clear, though, that Sea Dogs president and general manager Geoff Iacuessa was the main figure in bringing them back to Hadlock.

"We'd come up with the idea a couple years before that and started really thinking about it during the 2011 season," Iacuessa said. "Basically, the concept was to bring a mascot band for both more mascots and more entertainment."

The Portland front office realized that Reading, a fellow Eastern League team, had a mascot band at select games and, Iacuessa heard, "had great success with it." What Could've Been Nights -- in which teams play under the names they forsook to establish their current identities -- also began to pop up around the Minors at the time. The Kastaways idea capitalized on the hilarity of mascots playing instruments while giving a nod to the creatures and characters that might have become synonymous with pro baseball in Maine had things gone differently.

"We started kind of conceptualizing it with ... 'There were several other potential mascots and team names that could have won,'" Iacuessa said. "And I'm a big fan of having music in the front plaza, because it just creates that mood that you're coming into something with energy and excitement. ... It just adds to that entertainment value when you're coming to the ballpark."

From that concept, execution was a breeze. As Herman the Power Hog stressed, Portland has a large music scene for a city of its size. Before the 2012 season, Iacuessa reached out to Sam Pfeifle, a bluegrass musician and music writer for the now-defunct Portland Phoenix. The GM made it clear that the band needed to be family-friendly and dependable, and Pfeifle placed a few phone calls around town to find the right group. At some point in the winter of 2011-12, in a garage or basement or other rehearsal space somewhere in Southern Maine, five adults donned furry suits and masks and began to play. When the snow melted and baseball returned, The Kastaways were born.

"We get a lot of double takes," Rathbone admitted, "like, 'What did I just see?'"

Most mascots, of course, are not great verbal communicators. The members of The Kastaways, in addition to singing, get chatty with fans. Rathbone especially makes a point to approach kids with high-fives or to crack jokes with their parents.

"It was really important to have them interact with the fans and make that part of it, A.) to legitimize it, to prove that they're actually performing and they're not just up there walking around [with prerecorded music playing], and B.) just to make it fun," Iacuessa said. "That's the thing they do really well. They can see a Yankee fan and make fun of a Yankee fan. When they see groups coming in, karate groups, Little League groups, whatever it is, they'll kind of call attention to it -- 'Hey, I bet you guys are having a good season.' It's just another way to make people feel important, and also entertained."

On Saturday, they played two sets of about a half-hour each, banging out six classic rock standards. Slugger arrived on the plaza, and the band welcomed him with no hint of past resentments. He boogied with The Kastaways and fans. The band was later joined by Oakie the Acorn, the mascot of the locally operated Oakhurst Dairy. Fans laughed and danced. A few toddlers initially hid behind their parents, but soon were won over. Those kids weren't really in The Kastaways' key demographic, anyway.