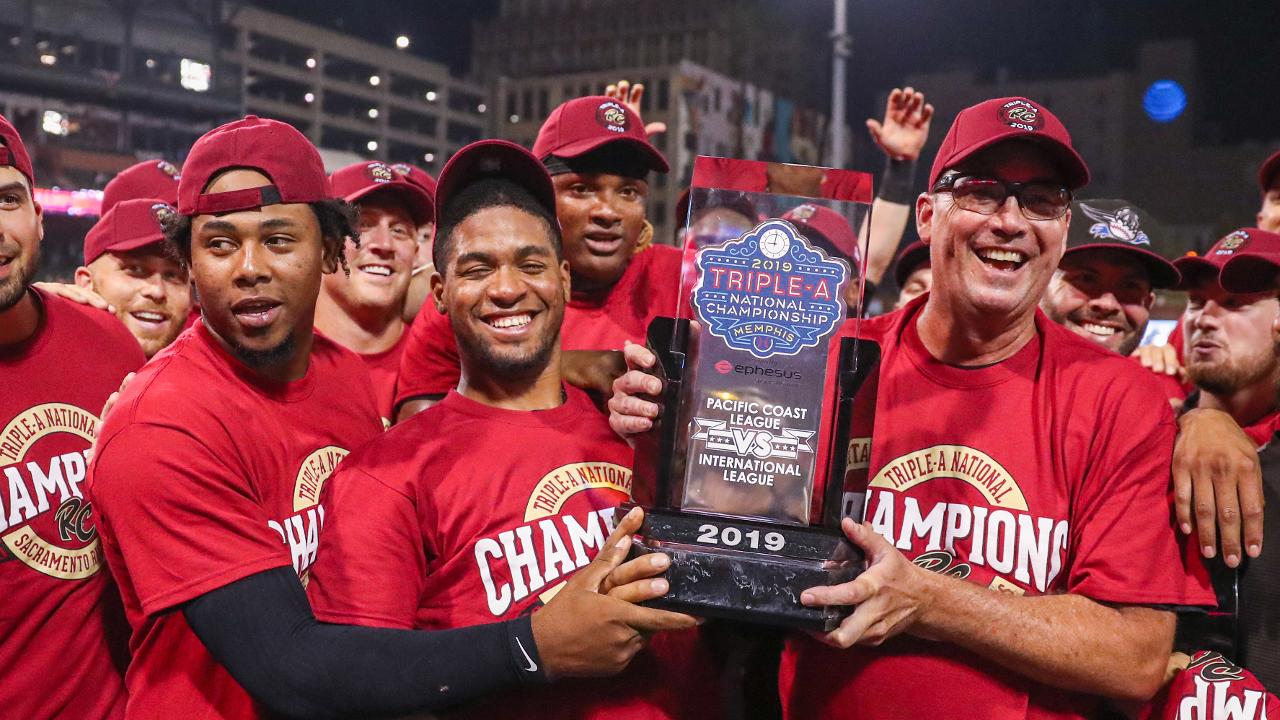 West Sacramento, Calif. - The Sacramento River Cats, in conjunction with the San Francisco Giants, are thrilled to welcome Dave Brundage back for his fourth season as manager of the River Cats as they defend their Triple-A National Championship during the 2020 season.

Brundage will be joined by Damon Minor, who will return for his fifth season as the River Cats' hitting coach, and fundamentals coach Jolbert Cabrera , who will enter his second season in Sacramento. One of two newcomers for 2020 will be pitching coach Glenn Dishman. The training staff will be made up of athletic trainer David Getsoff and strength and conditioning coach Andy King who are each returning for their third season, as well as athletic trainer Hiro Sato, who returns for his second year. Also joining the staff for 2020 is bullpen coach C.J. Picerni.

In 2019, Brundage led the River Cats to the franchise's 12th division title, fifth Pacific Coast League crown, and a record third Triple-A National Championship. An Oregon native, he joined the River Cats in 2017 and has compiled a 192-229 record in his three seasons at the helm in Sacramento. Before coming to Sacramento, the veteran manager spent the previous four seasons with the International League's Lehigh Valley IronPigs (Philadelphia Phillies Triple-A).

Brundage, 54, made his managerial debut in 1995 with the Riverside Pilots (Seattle Mariners Class A-Advanced) but has spent most of his managerial career at the Double- and Triple-A levels. Prior to his four seasons with Lehigh Valley, Brundage helmed the Richmond/Gwinnett Braves (Atlanta Braves Triple-A) for six seasons from 2007 through 2012. He made his Triple-A debut in 2006 with the Pacific Coast League's Tacoma Rainiers (Seattle Mariners Triple-A). Brundage has a career record of 1,563-1,544 (.503) in 22 seasons as a manager including a 985-1010 (.494) mark at the Triple-A level.

Selected in the 4th round of the 1986 Amateur Draft out of Oregon State University, Brundage spent 10 seasons as a player in the minor leagues with the Phillies and Mariners organizations.

Minor, 44, returns to the River Cats for his fifth season as hitting coach.In his fourth year with the team, Minor worked closely with River Cats players Mike Yastrzemski, Jaylin Davis, and Zach Green, who would eventually go on to make their Major League debuts in 2019.

A former Giant, Minor was drafted by San Francisco in 1996 before making his Major League debut in 2000. In 136 games over parts of four seasons, Minor hit .232 with 13 home runs. He set a career-high in 2002 when he played in 83 games and slugged 10 home runs, helping the Giants claim the National League pennant. While in the Giants farm system, he compiled a .277 batting average with 179 home runs and 648 RBI across nine seasons.

Glenn Dishman joins the club from Richmond, Va. after serving two seasons as pitching coach for the Flying Squirrels (San Francisco Giants Double-A). The former left-handed Major Leaguer will replace fellow lefty Steve Kline, who will swap clubs with Dishman and rejoin the Richmond staff where he had previously spent three seasons prior to his two-year stint in Sacramento.

Dishman, 49, grew up in the Bay Area and attended Moreau Catholic High School in Hayward. He would go on to appear in 33 Major League games spread across three teams, most notably his rookie season in 1995 when he made 16 starts for the San Diego Padres totaling 97 innings pitched.

CJ Picerni, 27, rounds out the River Cats field staff for 2020. Picerni was drafted by the Washington Nationals as a catcher in 2016, and is entering his second season as a minor league bullpen catcher and coach for the San Francisco Giants.