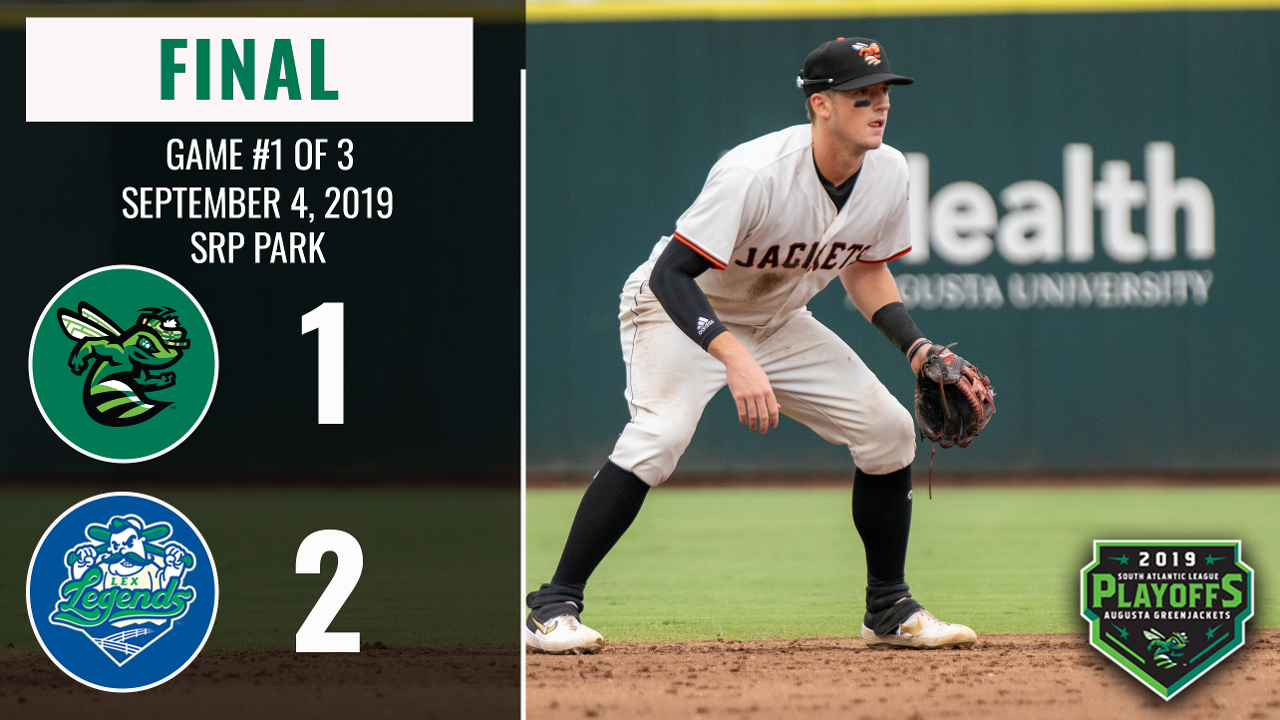 NORTH AUGUSTA, SC: In a dandy on Wednesday night, the Lexington Legends (Kansas City Royals) snuck away with Game#1 of the three-game series with the Augusta GreenJackets (San Francisco Giants) at SRP Park. A 2-1 win for Lexington in the first game of the South Atlantic League South Division Championship Series helps the Legends jump out to an early lead.

The Jackets could only muster up one-hit on a Tyler Fitzgerald home run in the 7th inning. Jon Heasley tossed seven-innings of one-hit ball to get the win. The Jackets fell behind in the 4th inning when Jeison Guzman smashed a solo home run to right field.

It was the only mistake Norwith Gudino would make as he went 5.2 innings and allowed just the one-run. After the Jackets tied the game at one, in the 8th inning, a single from Rubendy Jaquez, with one out, put a man aboard. Jeison Guzman singled and Jaquez tried to move from 1st to 3rd base. The throw from right fielder Franklin Labour kicked off the glove of the cut-off man, and shortstop, Tyler Fitzgerald. Guzman darted for 2nd, and GreenJackets 3rd baseman Sean Roby grabbed the baseball and threw it into right field, allowing Jaquez to walk home from 3rd base, giving Lexington a 2-1 edge.

The two errors on the play cost the Jackets. Brandon Marklund came out of the Lexington bullpen and retired all six he faced the rest of the way, giving the Legends a Game #1 victory.

Jeison Guzman ends his night 3-4, with a home run and an RBI. The Jackets offense collects just the one-hit from Fitzgerald. Augusta will travel to Lexington tomorrow before Game 2 of the series on Friday evening from Whitaker Bank Ballpark.

Kai-Wei Teng will make the start against the Lexington Legends on Friday night from Whitaker Bank Ballpark in Game #2 of the South Atlantic League South Division Championship Series. Teng was added to the GreenJackets roster back on August 9th, 2019 after he was traded on July 31st from the Minnesota Twins to the San Francisco Giants for reliever Sam Dyson. It was Teng and two other prospects sent back to the Giants. Teng made five starts for the GreenJackets in the regular season, and he posted an ERA of 1.55. He went seven-innings in each of his last two starts. He signed with the Minnesota Twins out of Taichung, Taiwan in 2018.

The Legends will go with Zach Haake in the 2nd game of the series on Friday night. Haake threw 75.2 innings this year in 18 starts, and he went the last nine innings of the regular season without allowing an earned run. Haake has faced the GreenJackets twice this year. Back on June 28th at SRP Park, Haake went five-innings and did not allow a run. In his 2nd start, again at SRP Park, he went four-innings and did not allow a run on August 23rd. He needed 73 pitches to get through those four-innings. Haake was a 6th round pick in 2018 out of the University of Kentucky.