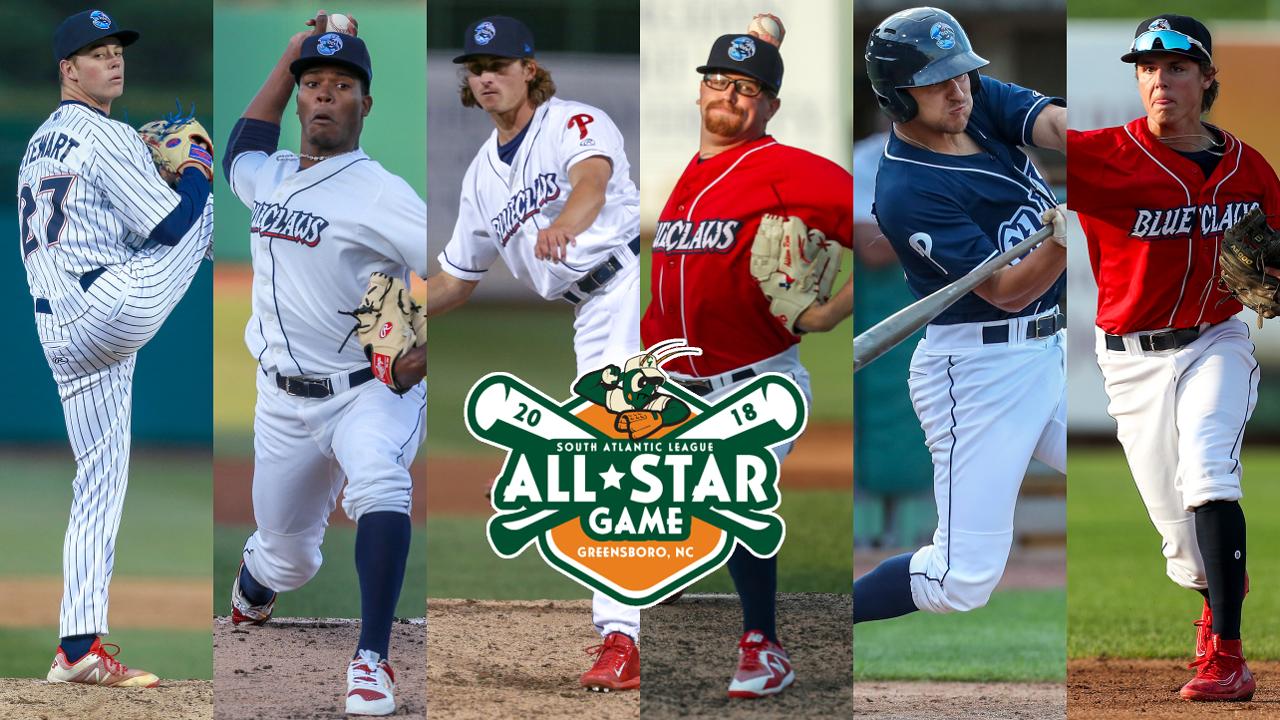 The BlueClaws will send six players to the 2018 South Atlantic League All-Star Game.

The six All-Stars match what the BlueClaws last year and is just one off of the franchise record of seven set in 2007. This marks the sixth time in 18 seasons that the BlueClaws will send at least five players to the All-Star Game.

(Stats that follow are through games of June 4th)

Will Stewart is 5-0 with a league-best 1.23 ERA and will be the starting pitcher for the Northern Division All-Stars. The BlueClaws have won all nine of his starts and he threw a complete-game shutout with a career-high 10 strikeouts in his most recent start on May 30th. He was a 20th round pick of the Phillies in the 2015 draft from Hazel Green, Alabama.

Stewart follows 2017 BlueClaws LHP Nick Fanti as the second straight BlueClaw to serve as the starting pitcher in the All-Star Game. They join David Buchanan, who started the game in 2011, as the only BlueClaws pitchers to start the SAL All-Star Game.

Ramon Rosso is 2-1 with a 1.44 ERA so far this year. The right-hander from the Dominican Republic is third in the league in ERA and second among league starting pitchers with 11.3 strikeouts per nine innings. He was signed by the Phillies in 2017 after previously being a member of the Dodgers organization.

Addison Russ is 5-0 with a 0.98 ERA and a league-best 11 saves so far this year. He has also appeared in a league-leading 20 games for the BlueClaws, while striking out 32 and walking just three in 27.2 innings pitched. Russ was a 19th round pick last year from Houston Baptist.

Kyle Dohy is 3-3 with a 1.00 ERA and five saves over 19 appearances. The left-hander has 51 strikeouts in 27 innings and has fanned 51 of 107 batters faced thus far this season. Dohy has fanned 17 batters per nine, the highest rate among all SAL relief pitchers. He was drafted in the 16th round last year out of Cal-Poly Pomona.

Jake Scheiner is hitting .273 with a team-leading seven home runs so far this year, while adding six stolen bases. He has started games at first base, third base, and left field and has served as the BlueClaws lead-off hitter for the last 30 games. He was a 4th round pick last year from the University of Houston.

Nick Maton is hitting .267 with three home runs and three stolen bases as the BlueClaws starting shortstop. He is second on the team with 12 multi-hit games (behind Scheiner's 16). Maton was a 7th round pick last year from Lincoln Land Community College in Illinois.

Lakewood's pitching staff leads both the South Atlantic League and all of full-season Minor League Baseball (120 teams) with both a 2.56 ERA and 11 shutouts over their first 56 games of the year. They have allowed three runs or less in 30 of those 56 games.

The BlueClaws enter their game Tuesday night at Hagerstown within 2.5 games of first place Kannapolis. After a week on the road, the BlueClaws return home for the final seven games of the first half beginning Monday, June 11th.

Tickets for all remaining home games are available by calling 732-901-7000 option 2 or online at BlueClaws.com.