Bulls score 16, run away from Bats 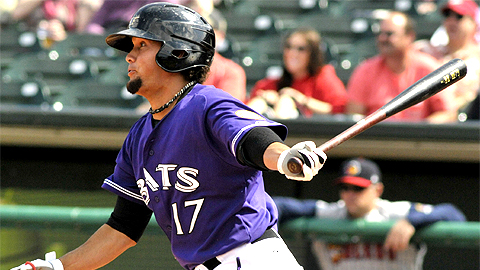 DURHAM, N.C.-The Durham Bulls lead the International League in hitting and that potent offense was on full display Monday night as the Bulls pounded 15 hits en route to a 16-3 win over the Louisville Bats. Durham designated hitter Shelley Duncan drilled a pair of three-run homers while second baseman Mike Fontenot added a three-run shot of his own as the Bulls rudely welcomed the Bats to Durham Bulls Athletic Park.

The Bulls' 16 runs are the most by a Louisville opponent this season and the 13-run margin of defeat marks the largest the Bats have suffered this season.

Duncan finished the night 2-for-3 with the two home runs and six RBI, the most runs driven in by a Louisville opposing player this season.

With the loss, the Bats (35-36) snap their season-high five-game winning streak. Louisville also fails to get above the .500 mark on the season for the first time since the Bats were 24-23 after a 10-0 win over Pawtucket May 23.

The Bulls (45-26) opened the scoring in the bottom of the first inning. Center fielder Jason Bourgeois led off the night for Durham with a groundball single to right.   With shortstop Tim Beckham batting, Bourgeois stole second for his 17th steal of the season and moved to third as Bats second baseman Jason Donald could not handle the throw from catcher Corky Miller. Beckham followed with a sac-fly to center to give Durham a 1-0 lead. Right fielder Brandon Guyer kept the pressure on with a line drive double to right and scored on first baseman Leslie Anderson's single to left to put Durham in front 2-0.

Louisville answered with two runs in the top of the second. Left fielder Felix Perez grounded a single to left to start the frame. After a pop out by first baseman Mike Hessman, right fielder Josh Fellhauer singled on a line drive to left. With two on, Donald collected his seventh RBI of the season with a single to left to score Perez and cut the Durham lead to 2-1. After a walk to Miller loaded the bases, shortstop Kristopher Negron flied to left, scoring Fellhauer for Negron's 20th RBI and squaring the game 2-2. Negron finished 2-for-3 on the night with the RBI.

However, center fielder Billy Hamilton struck out with two on to end the threat.

Durham had plenty of answers for the Bats in the bottom of the second. Fontenot walked to lead off the inning, moved to second on a groundout by catcher Jesus Flores, to third on a line drive single to right by third baseman Cole Figueroa and scored on a groundout by Bourgeois to put the Bulls back in front 3-2. Beckham followed with a single to score Figueroa and open up a 4-2 lead.

After a Guyer single, Anderson lined a single to right to score Beckham and give Durham a 5-2 lead. Duncan came to the plate next and hammered a line drive over the 32-foot Blue Monster in left to complete the six-run Bulls inning. The Bulls sent ten batters to the plate and the six runs are the most scored by a Louisville opponent in one inning this season.

The homer also chased Louisville starter Pedro Villarreal. The right-hander got through just 1.2 innings, allowing 8 runs on 8 hits with a walk and a strikeout while taking the loss. Duncan's home run was the IL-leading 16th Villarreal has allowed as a Bat this season.

Bulls starter Alex Colome was on a pitch count and left after 2.1 innings (57 pitches), allowing 2 runs on 5 hits with 1 walk and 3 strikeouts. Cory Wade earned the win in 2.2 innings of relief, allowing a run on 3 hits.

The Bats' one run off Wade came in the fifth when Perez flied to center to score designated hitter Chris Heisey for his team-leading 42nd RBI of the season, cutting the Durham lead to 8-3. Heisey finished 2-for-4 with a run scored and a strikeout in the first game of his Major League rehab assignment with Louisville.

Durham tacked on four in the sixth and four in the seventh to provide the final margin. Fontenot drilled his three-run homer over the center field wall off Louisville reliever Nick Christiani in the sixth. In the seventh, it was Duncan launching his second three-run homer of the night to left toward the iconic Bull that sits above the Blue Monster.

Duncan's second long ball came off Miller, who came out from behind the plate to pitch the seventh and eighth innings. It was Miller's third appearance on the mound this season as the knuckleballer allowed 4 runs on 3 hits, including Duncan's homer, with a walk and a strikeout. The four runs, the first Miller has allowed on the mound this season, all came in the seventh as the catcher got the Bulls in order in the eighth. In 4.1 innings (3 appearances) on the hill this year, Miller has now allowed 4 runs on 4 hits.