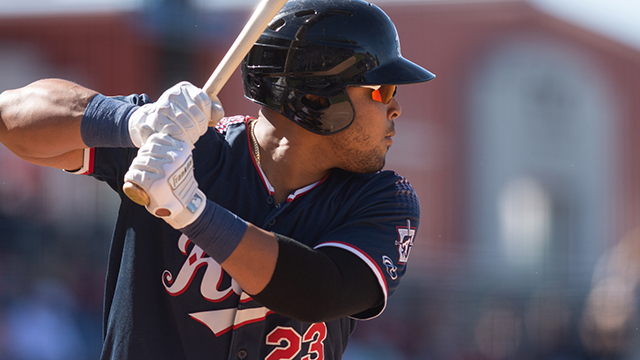 This season, Triple-A baseball decided to use the same ball that is used in Major League games, which brings much controversy over whether the ball is "juiced due to the increase in home runs per game. With the Triple-A season reaching its All-Star Break, we can look at some numbers to see if the ball is truly "juiced".

According to astrophysicist Dr. Meredith Wells, the ball "…seems slightly larger…", as well as "…seam height had decreased to such an extent that, even taking uncertainties into account, the seams were demonstrably lower," and "…the static friction for the 2019 balls is 27.7 percent lower, a statistically significant result demonstrating the leather covers are genuinely smoother" (Wells). These findings are important because it illustrates the effect the ball can have on play. With lower seam height and a smoother leather covering on the ball, it contributes to a lower drag coefficient (the resistance of an object in a fluid environment, such as air or water) which makes home runs more likely to occur. Also, slicker leather can possibly affect the grip a pitcher can get on the baseball, which some pitchers have complained about this season. She also states, "Not only are the balls rounder (therefore producing less drag), but 'nestled down' seams might decrease the impact of the already-lower seam height. This double-whammy would produce a ball that travels farther" (Wells). With these changes to the ball, have batters been more successful?

In the 2018 season for the Pacific Coast League and International League, home runs totaled 2,097 and 1,451 respectively, as well as batting averages of .270 and .232. This season, home runs in the PCL are at 2,061 while the total number in the International League remains at 1,552. As visible by the numbers, both leagues have seen an increase in total balls that have left the park. This also remains fascinating since both leagues have only played 87 to 90 games. PCL home runs per game (both teams) have increased from 1.88 per game to 2.87, while International League games have seen a spike from 1.602 per game to 2.508. From these findings, we can determine that the ball is affecting the dynamics of the game, but it is not a bad thing as many are arguing.

Attendance has increased, which may or may not be due to the increases in home run totals. Last season, attendance for the entire season totaled 26,763,852 in 2,023 games while 2019 has accumulated 22,070, 838 fans in 1,853 games (due to the Mexican League games). Whether or not one believes the ball is "ruining" the game, fans are still attending games.

The "new" ball brings much dispute between pitchers and batters. Pitchers argue that balls that would usually be flyouts are now carrying into the bleachers, while hitters love the change as they continue to mash at the plate. One interesting take comes from Louisville pitching coach Jeff Fassero who said, "I'd rather throw this ball. The seams are better. The ball spins better. I've seen better spin. Better breaking balls. It feels better in your hand. This ball breaks better than the minor league ball. Obviously, it's carrying better, but if you execute pitches, you won't give up home runs." If the MLB and Triple-A continue to use this ball, we may see another 70 home run season again, which has only been done twice, McGwire in 1998 and Bonds in 2001.