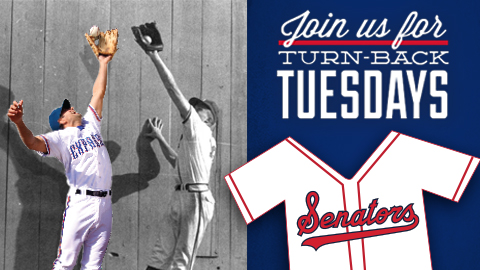 ROUND ROCK, Texas - Alaska became the 49th state, Zach Wheat was the lone inductee into the Baseball Hall of Fame and the Austin Senators won the Texas League Championship. The year was 1959 and this season, the Round Rock Express is turning back to that time.

Every Tuesday home game during the 2013 season, the Express will don throwback uniforms similar to those worn by the 1959 championship Senators squad for "Turn Back Tuesday" presented by Cedar Park Dentistry. The uniform tops are light beige in color, with red piping and a red script "Senators" across the chest, outlined in black. The back features block numbers in the same red and black color scheme. The players will wear their pants knee length with red stirrups, sticking to the true throwback feel. The uniform will be completed with an Austin Senators red cap with the team's logo emblazoned on the front.

"The Senators are a big part of professional baseball history here in Central Texas," said Laura Fragoso, senior vice president of marketing for the Express. "They paved the way for our success and we're thrilled to be able to pay homage to them throughout the season."

The Express are also turning back ticket prices for all Tuesday home games. Fans can purchase half-price tickets in advance or at the ticket office on the day of game at Dell Diamond. Additionally, Austin Senators merchandise will be available for purchase in the Railyard Team Store.

To reserve your ticket plans, including full season, 20-game and flex plans, call the Express ticket office at (512) 255-2255 or visit www.RoundRockExpress.com. Keep up with the Express on Facebook and Twitter!