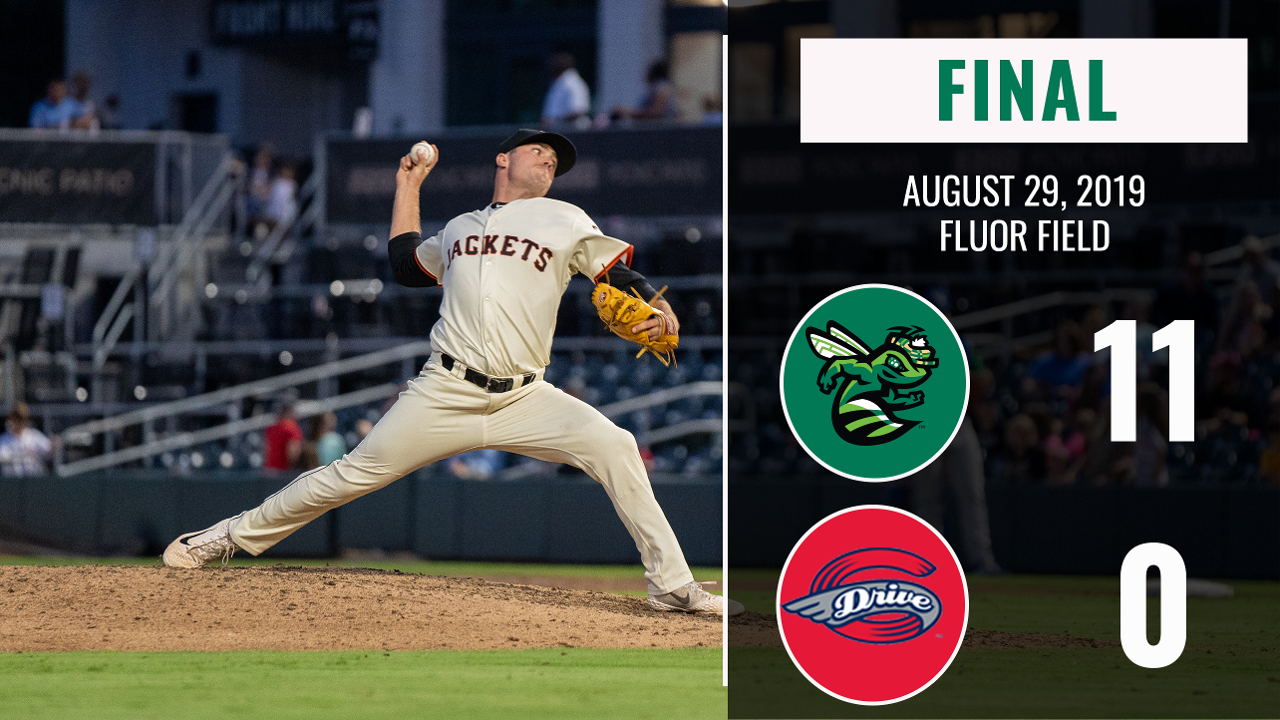 GREENVILLE, SC: The Augusta GreenJackets (73-61, 37-29) defeated the Asheville Tourists (56-79, 24-41) by a final score of 11-0 on Thursday night. The win for the Jackets, paired with the Asheville Tourists loss, puts Augusta one-game ahead of Asheville in the 2nd half standings, as we head into the final four-games of the season.

The shutout was the 9th of the season for Augusta pitching.

The Jackets struck first in the 2nd inning. Sean Roby mashed his 3rd home run of the season. The two-run shot gave Augusta a 2-0 lead. The Jackets added on in the 3rd inning. For the 2nd night in a row, Frankie Tostado delivered a sacrifice fly. With the Jackets leading 3-0, Jacob Gonzalez ripped a single to score another run, and it was 4-0 Jackets after three innings.

Norwith Gudino was brilliant on the mound for the GreenJackets. He finished his night after 5.2 innings, and he ended with 12 strikeouts, a career high. He also allowed just two hits.

In the 8th inning, the GreenJackets scored three more runs. Sivira and Fitzgerald picked-up their 2nd RBI's of the night, and it was Tostado with RBI #4 on a single to extend the Jackets lead to 11-0.

Matt Seelinger went two-innings out of the Jackets bullpen, while Preston White threw a scoreless 9th inning to give Augusta the shutout.

Gudino was phenomenal in his return to the GreenJackets. He finishes with a career high 12 strikeouts, and gets the win for Augusta. It was the first time Gudino had thrown for the Jackets since April.

The GreenJackets will roll with Adam Oller in the series opener against the Columbia Fireflies (New York Mets) on Friday evening. Oller is coming off one his best showings in 2019. On August 25th against the Lexington Legends at SRP Park, Oller went 6.2 innings and he allowed only one earned-run. He surrendered only four-hits and had a season high 10 strikeouts. Oller opened up his 2019 campaign with the GreenJackets against Columbia back on May 30th. He'd exit after just one-inning when he was struck by a line drive on the elbow. Oller was drafted in the 20th round by the Pittsburgh Pirates in 2016. He was released in November of 2018, and the San Francisco Giants signed him to a minor league contract in May of this year.