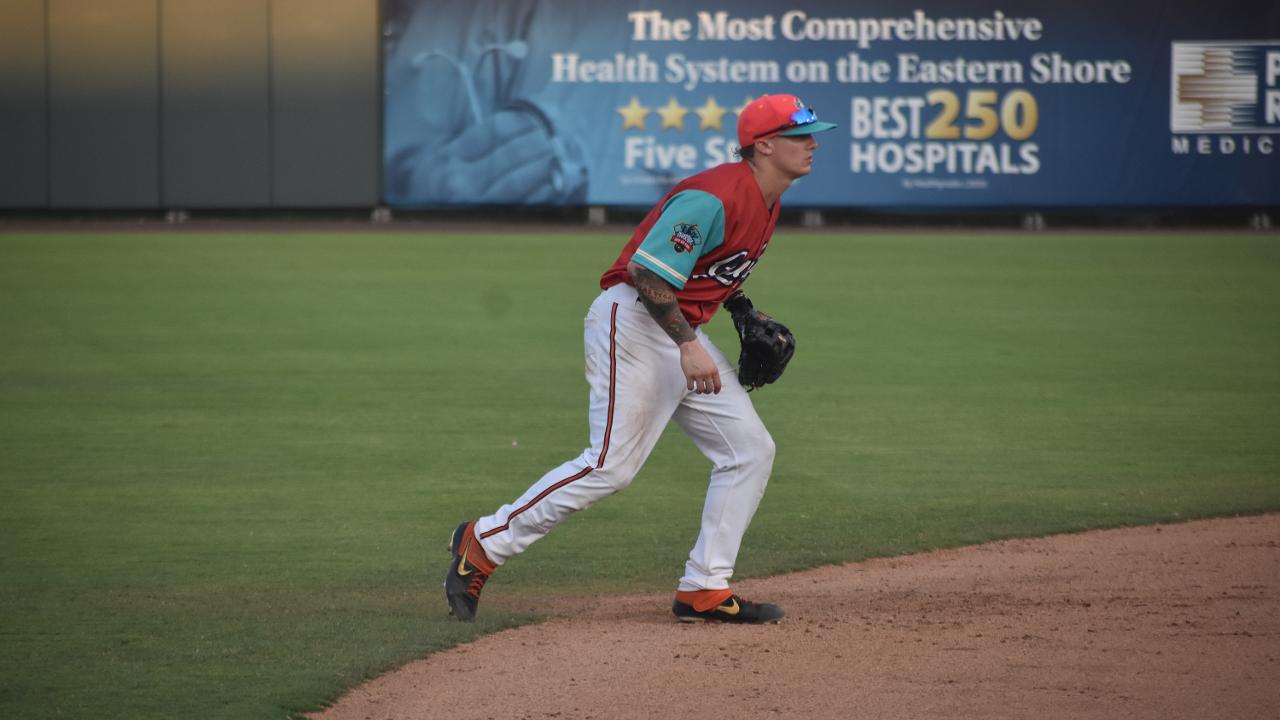 SALISBURY, MD - The Delmarva Shorebirds stalled their engines at the plate against the Hickory Crawdads, falling 3-1 in 10 innings on Sunday evening at Arthur W. Perdue Stadium.

With the game tied 1-1 after nine, the Crawdads (15-8, 56-33) began the top of the 10th with Jonathan Ornelas at second. Kole Enright immediately bunted him over to third, and Jax Biggers then brought him home with a sacrifice fly to center, putting Hickory on top. Sherten Apostel restarted the rally with a base hit and was pinch-run for by Frainyer Chavez. Tyreque Reed then sent Chavez racing around the bases as he smashed an RBI double to right center, and giving Hickory their 3-1 lead.

Nick Snyder (3-1) picked up the win in relief for the Crawdads. Snyder went 1.2 innings and struck out the side in the 10th to end the game. Jhon Peluffo (1-3) took the loss for the Shorebirds (17-7, 65-28). Peluffo went two innings, allowing two runs (one earned) on two hits and two walks.

Hickory used a trio of walks to crack the scoreboard in the third. Enright drew a free pass to begin the inning and after a flyout Apostel worked a walk as well. Reed then walked to load the bases. Melvin Novoa subsequently popped out foul down the left field line, on which Enright tagged up and scored from third on to give the Crawdads a 1-0 lead.

Cadyn Grenier brought the game back to level in the fourth. Leading off the inning, Grenier clobbered a solo homer to left, his seventh of the year, tying the game at 1-1.

The Shorebirds had the best scoring opportunity prior to extras, loading the bases with one out in the sixth. The chance went for naught, however, as Seamus Curran bounced into an inning ending double play.

For Delmarva, Robert Neustrom had the only extra-base hit other than Grenier's homer, a double in the sixth. Cody Roberts picked up a single as well, extending his hitting streak to seven games.

Hickory had just four hits in the game, two of them coming back-to-back in the tenth. In addition to his RBI double, Reed drew two walks while Matt Whatley drew three free passes of his own.

In his return from the Futures Game, Grayson Rodriguez started for Delmarva but did not factor into the decision. Rodriguez went five innings, allowing one run on two hits while walking six and striking out three.

Cole Winn started for Hickory, and like Rodriguez, did not factor into the final decision. Winn went five innings, conceding just one run on three hits while walking one and striking out four.

Bridging the gap between Rodriguez and Peluffo, Juan Echevarria fired three perfect innings for Delmarva while striking out two. Likewise for Hickory, Sam Hellinger filled the void between starter Cole Winn and Snyder at the back end, throwing 3.1 innings of shutout baseball.

The Shorebirds now welcome in the Lakewood BlueClaws for a three-game series. Delmarva has not announced its starter for the opener while Lakewood turns to Manuel Silva (2-2, 4.02). First pitch is slated for 7:05 p.m. with gates opening at 6:00. Monday is 47 ABC $3 Buck Monday presented by Wicomico Heating and Air Conditioning at Perdue Stadium. Pregame coverage on Fox Sports 960 AM and the MiLB First Pitch App begins at 6:50 with Will DeBoer and Sam Jellinek on the call.