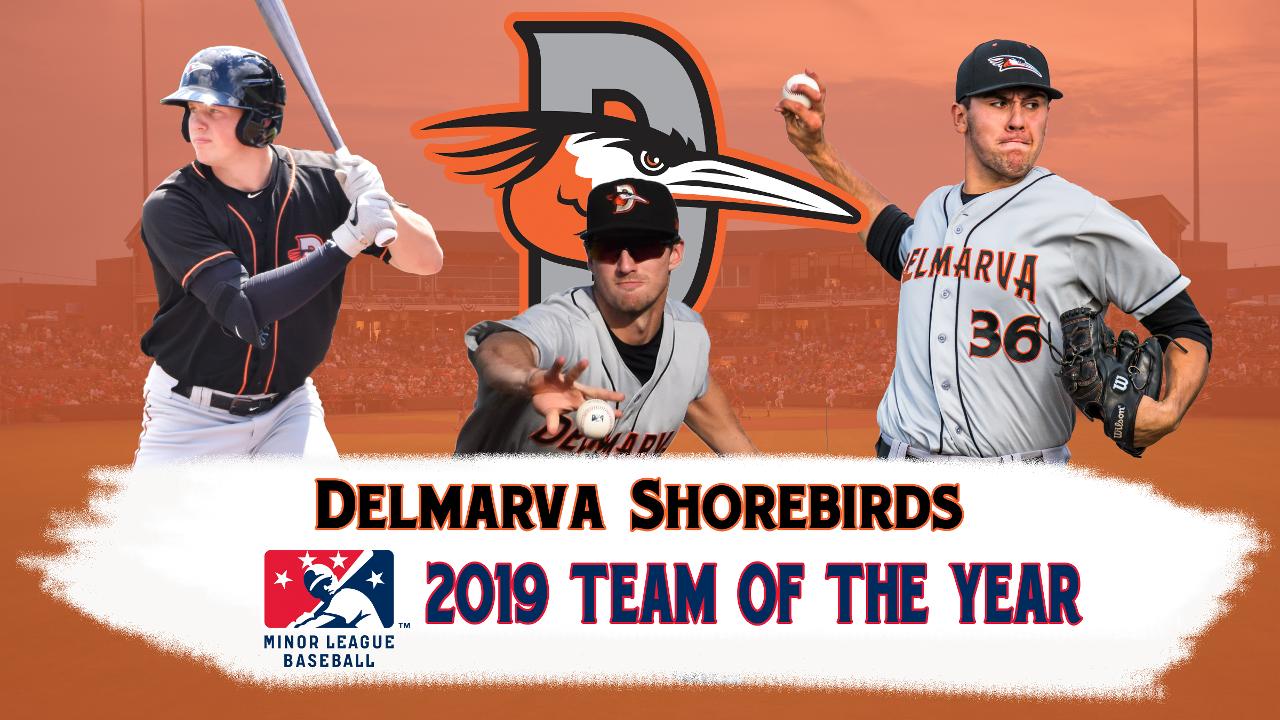 SALISBURY, MD - Delmarva's best baseball summer ever has earned one last cherry on top. On Tuesday afternoon, MiLB.com named the Shorebirds as their Team of the Year for 2019, a first in franchise history.

In their 24th season at Arthur W. Perdue Stadium, the Shorebirds finished 90-48, the most wins across all of Minor League Baseball in 2019. Manager Kyle Moore and company smashed Delmarva's previous wins record (83, 1996) and became the first South Atlantic League team to win 90 since the 2006 Augusta GreenJackets, a team which featured future major league all-stars Pablo Sandoval and Sergio Romo. Stretched out over a major-league season, the Shorebirds' .652 winning percentage would equate to 106 wins.

"I think it was just how hard the guys played and how we stuck with it, even after the All-Star break -- it was such a young group of guys," said Moore in an interview with MiLB.com in the leadup to their announcement. "I think with a group in their first year of pro ball, the staff did a great job keeping these guys going all year because we started off hot. But the Washington Nationals will tell you it's not how you start, and we ended up finishing good too. We went through July and August and the kids got better."

The 2019 season had the makings of something special right from the get-go. On April 13, the Shorebirds found themselves down 5-0 in the bottom of the ninth and on the verge of getting no-hit by Lakewood. With one out and a man on second, Ben Breazeale slashed an RBI double to center, ending the no-hitter and the shutout. Two more runs and six batters later, JC Encarnacion came to bat with the bases loaded and two out. On an 0-2 pitch, Encarnacion belted a deep fly ball down the left field line. All 4,000-plus in attendance, Encarnacion included, watched as the ball tucked itself just over the corner wall for a walkoff grand slam, powering Delmarva to a stunning 7-5 win. What came next was pure pandemonium, from the celebration on the field to the national media frenzy. Encarnacion's slam went viral, featured everywhere from MASN to MLB.com, and became an indelible image in a season filled with so many remarkable moments.

The no-no-turned-grand-slam was the Shorebirds' fifth win in a row and came right in the middle of a remarkable 10-game winning streak from April 9-18. In the midst of the streak - the longest since the days of Manny Machado and Jonathan Schoop in 2011 - came a perfect seven-game homestand with sweeps of Lakewood and Kannapolis, marking the second straight season Delmarva won every game in its first Perdue Stadium stop of the year.

The next month brought another perfect week, this time an undefeated seven-game road trip to Columbia and Asheville from April 30 through May 6. By the end of that stretch the Shorebirds were 24-4 and well on their way to a record-smashing season.

After a scintillating first half, it came as no surprise that the Shorebirds dominated the SAL All-Star Game, sending a league-high eight players to Appalachian Power Park in West Virginia on June 18. Pitchers Grayson Rodriguez, Drew Rom, Ofelky Peralta, and Zach Matson joined catcher Daniel Fajardo, shortstop Adam Hall, outfielder Doran Turchin, and DH Seamus Curran on the Northern Division roster. Rodriguez was voted the North's starting pitcher, and Turchin picked up game MVP honors with a go-ahead bases-clearing double in the eighth.

Grayson Rodriguez became the breakout star not just for the team but also for the entire Orioles organization. The 19-year-old went 10-4 with a 2.68 ERA in 20 starts, striking out a remarkable 129 batters over just 94 innings. G-Rod lit up the radar gun all summer, fanning 10 batters in a game four times. In addition to starting the All-Star Game, Rodriguez was named the Sally League's top right-handed pitcher and Most Outstanding MLB Prospect; he also pitched in the MLB All-Star Futures Game in Cleveland, the first to do so as a Shorebird in five years. At the end of the season Rodriguez shared the organization's Jim Palmer Minor League Pitcher of the Year Award with former Delmarva ace Michael Baumann.

Late August brought the arrival of the first No. 1 overall pick to ever don a Shorebirds uniform. Catcher Adley Rutschman arrived in Salisbury on August 21; in his team debut he threw out a speedy basestealer at second base and caught a two-hit shutout. Over the next two-and-a-half weeks Rutschman charmed local and national media while also hitting a pair of home runs and notching three big hits in Delmarva's playoff run.

By the end of the season the Shorebirds made room for even more hardware as Grayson Rodriguez and Adam Hall were voted SAL Postseason All-Stars. Pitching coach Justin Ramsey was voted SAL Coach of the Year, overseeing a pitching corps that led all of MiLB in shutouts and saves while ranking top-five in ERA and WHIP and set a new league record with 1,389 strikeouts. Finally, skipper Kyle Moore picked up Manager of the Year for leading the minors' only 90-win team.

Delmarva went 48-21 in the first half and cruised to a Northern Division title; in the second half the Shorebirds went 42-27 and tied with Hickory atop the division. Despite a heroic 13-strikeout performance from Gray Fenter in Game 2 of the NDCS, the Shorebirds met their match and bowed to the Crawdads in a pair of one-run games.

Now the Shorebirds can turn their attention to 2020 and the hunt for their first SAL title in 20 years. The Shorebirds open their silver anniversary season at home when the Asheville Tourists come to Arthur W. Perdue Stadium on Thursday, April 9, 2020.