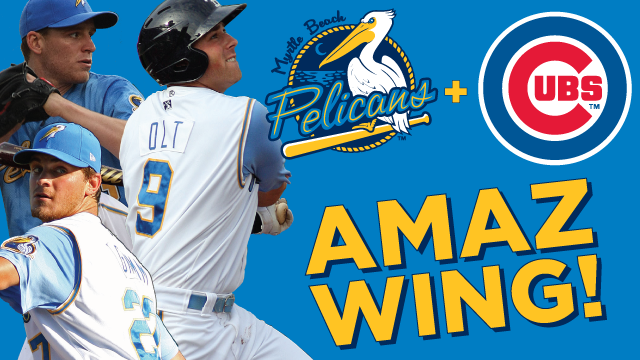 MYRTLE BEACH, S.C. (SEPTEMBER 16, 2014) - The Myrtle Beach Pelicans are pleased to announce that the team has reached an agreement on a player development contract with the Chicago Cubs for two years, encompassing the 2015 and 2016 seasons.

"The Cubs are an iconic national brand," remarked Pelicans General Manager and Vice-President Andy Milovich. "The success of our business is determined by fan interest, the quality of baseball, and the impact on Myrtle Beach from a tourism perspective. The Chicago Cubs present an incredible partnership in every aspect. The Cubs strengthen the Pelicans brand in a way that few, if any, other major league franchises could. Cubs fans can now visit their future stars in one of the iconic vacation destination spots in the US."

The Cubs are the oldest currently active American professional sports franchise playing in their original city. They play at Wrigley Field, the oldest ballpark in the National League and second oldest in Major League Baseball.

"Having our local baseball team linked with a truly national franchise that has as rich of a history as the Chicago Cubs is a great feat for the Myrtle Beach area," said Brad Dean, president and CEO of the Myrtle Beach Area Chamber of Commerce. "A growing number of our visitors are from the Chicago area, and this affiliation will link our community to the hopes of Cubs fans across the country."

The Myrtle Beach area of South Carolina consistently proves that it is worthy of the moniker "The Grand Strand" year-after-year. It continues to win prestigious awards ranging from being designated as one of "Best Family Vacation Spots," according to FlipKey, to its boardwalk being recognized as one of the "Best Boardwalks for Food across the USA," according to USA Today.

"From a baseball standpoint, the Cubs currently stand alone as far as minor league talent," added Milovich. "The players in their system position us well to get us back to the Mills Cup Championship Series and hopefully see our players move on to be a part of a World Series run as well."

The Cubs boasted one of the top farm systems entering 2014 and strengthened their core of young talent through a series of trades during the season. Keith Law of ESPN re-ranked organizations in late July and put the Cubs in top spot in all of baseball in terms of minor league talent.

The Kane County Cougars, the Cubs' affiliate in 2014 at Class-A, one rung below the Class A-Advanced level, won the Midwest League Championship and went a club-record 91-49, the best record in full-season minor league baseball this season.

"We are excited to reach an agreement with Myrtle Beach and begin working with Chairman Chuck Greenberg and General Manager and Vice President Andy Milovich," said Jason McLeod, the Cubs Senior Vice President, Scouting and Player Development. "Myrtle Beach is a well-respected franchise that will serve as a beneficial destination for our young players. We look forward to developing a successful relationship with the franchise and community."

The Cubs organization features a number of former Pelicans, including four players who have had big league time this season. Justin Grimm, Mike Olt, and Neil Ramirez, who were on the 2011 Pelicans club, all have played with the Cubs this season. Kyle Hendricks, who pitched for the Birds in 2012, won National League Rookie of the Month in August.

The Cubs Class A-Advanced affiliate had been the Daytona Cubs in the Florida State League from 1993 until now.

For the past four seasons, the Pelicans have been an affiliate of the Texas Rangers. Prior to that, Myrtle Beach spent 12 seasons as an Atlanta Braves Advanced-A affiliate, from the inaugural 1999 season through 2010.

"We want to thank the Texas Rangers for the last four years," added Milovich. "They were a great partner with us and provided tremendous talent on the field. They are world-class people on and off the diamond."

The Pelicans plan on hosting a press conference regarding the affiliation change at a later date. More details on this event are forthcoming.

Season tickets and mini plans for the upcoming 2015 season are on sale now. For information and tickets on seeing the future Cubs play with the Pelicans in 2015, contact the Pelicans Front Office at 843-918-6002.

For information on the city of Myrtle Beach and tourism on the Grand Strand, visit www.VisitMyrtleBeach.com.