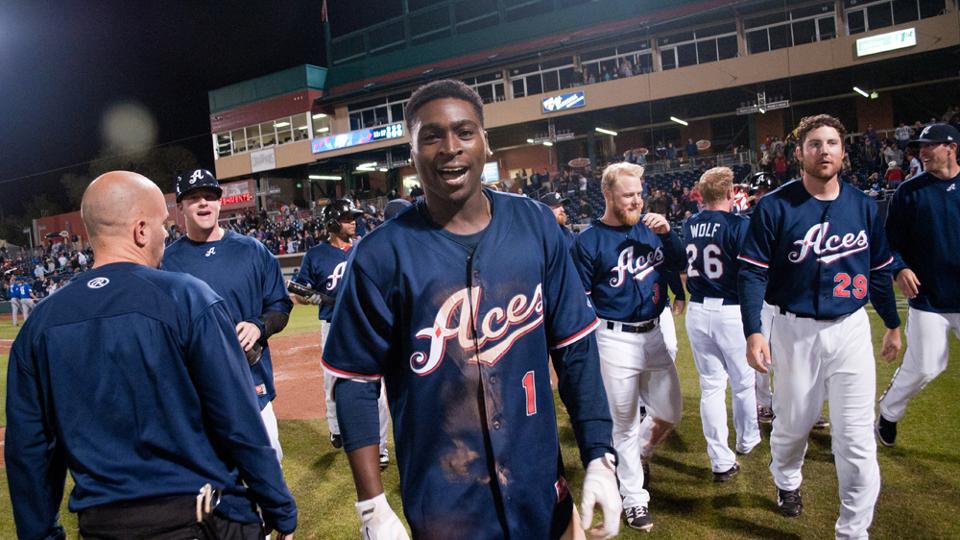 Where did some of your favorites end up?

One of the most recognizable alumni, Gregorius signed a one-year deal with Philadelphia in December. Before inking a deal with the Phillies, the shortstop has been with the New York Yankees since 2015. In Philly, he will be joined by Joe Girardi, who managed Gregorius for three seasons in New York from 2015-2017. 2020 will be Girardi's first season managing in the city of brotherly love.

The hard-throwing righty has had an interesting journey since leaving Reno for good in 2014. Since then, he's pitched for the Arizona Diamondbacks, Pittsburgh Pirates, Los Angeles Dodgers, Toronto Blue Jays, and Washington Nationals. However, Hudson has found a home in the nation's capital.

The reliever signed a two-year deal earlier this month. His career has been quite the storybook. He's undergone two Tommy John surgeries and closed out the 2019 World Series.

Hudson's career in Reno was short-lived. He threw five innings in 2012 allowing two earned runs and appeared again in 2014 for two scoreless innings.

Harris will join Hudson in Washington for the next few seasons as the reliever signed a three-year deal with the Nationals in January. The Texas native has been with the Astros since 2015.

Miley had a solid campaign for the Houston Astros last season going 14-6 with a 3.98 ERA. The success helped Miley ink a two-year deal with the Cincinnati Reds in December. The contract includes a club option for 2021.

Since being promoted from Reno, Miley has pitched in the big leagues for Arizona, Boston, Seattle, Baltimore, and Houston.

Braden Shipley signed a minor-league contract with the Kansas City Royals in December. With the contract, he received an invite to Major League spring training.

The righty spent parts of four seasons from 2016-2019 with Triple-A Reno. During his time here, he led the franchise in wins with 25, was second in innings pitched with 394.0, and second in strikeouts with 292. He was a Pacific Coast League All-Star in 2016.

Never afraid to swing the bat, the University of Nevada, Reno alum was also the last Aces pitcher to leave the yard.

Szczur was in Reno for a short time in 2019, appearing in just 44 games while fighting the injury bug. He was very productive when healthy hitting .322 with eight home runs, 12 doubles, 28 RBIs, and 34 runs scored to go with a .967 OPS. His time here also included a walk-off home run on June 4 against Nashville and a cycle against Tacoma on May 20.

The New Jersey native signed a minor-league contract with the Philadelphia Phillies in December which includes an invite to Major League spring training.

The catcher/outfielder was traded to the Diamondbacks from the Red Sox in April for prospect Marcus Wilson. He won a World Series ring with the Red Sox in 2018. Swihart played 28 games with Reno after the trade and hit .189. He elected free agency after the 2019 season.

The Texas Rangers are his next stop. The switch-hitter signed a minor-league contract with the club in December of 2019 which includes and invite to Major League spring training.

Luetge was one of the most consistent pitchers for Reno a season ago. The lefty went 5-2 with a 3.14 ERA and 46 strikeouts in 43 innings pitched.

He signed a minor-league contract that includes an invite to Major League spring training with the Oakland A's in November.

Brito spent 2019 in the Toronto Blue Jays' organization. He played 17 games in the Majors but spent the majority of the season in Triple-A Buffalo. He hit .282 over 97 games played with 16 home runs and 67 RBIs and 66 runs scored with the Bison.

Brito signed a minor-league deal that includes an invite to Major League spring training in December with the Pittsburgh Pirates.

Reinheimer spent three seasons in Reno also from 2016-2018 appearing in 311 games for the Aces, fourth in franchise history. His 323 hits are third-most in franchise history and 177 runs scored are fifth-most. The utility man spent 2019 with the Norfolk Tides, Baltimore's Triple-A affiliate. In 106 games played, he batted .246 with four homes, 15 doubles, two triples, 31 RBIs, and 43 runs scored.

Reinheimer signed a minor-league contract with the Minnesota Twins in December.

The outfielder spent 2018 with Las Vegas and 2019 in Iowa. This season, we could see him in Albuquerque at some point as he inked a minor-league deal with the Colorado Rockies earlier this month.