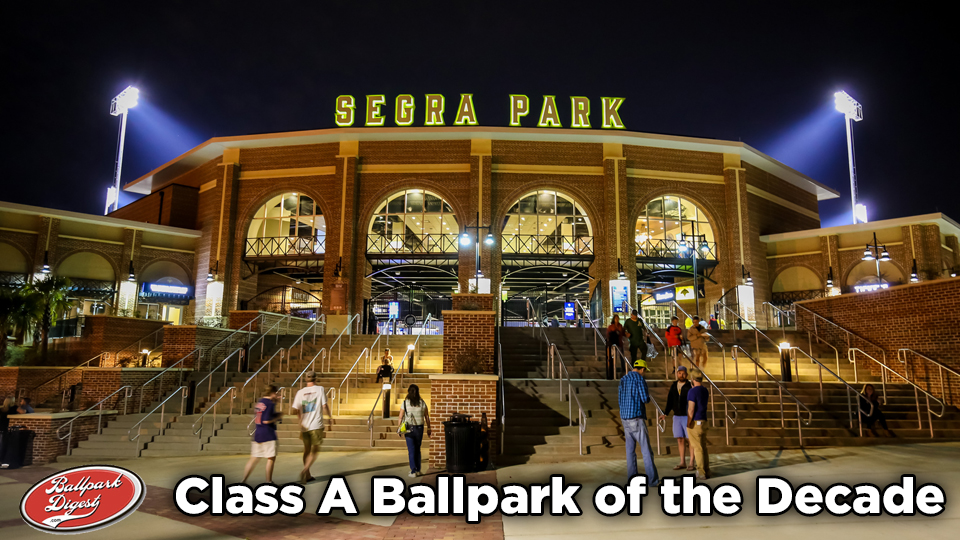 COLUMBIA, SC - Ballpark Digest has again honored Segra Park - this time as its Class A Ballpark of the Decade. The home of the Columbia Fireflies - the New York Mets South Atlantic League affiliate - was previously named the 2016 Ballpark of the Year by the trade publication after the team's inaugural season in 2016.

Segra Park is home to much more than just baseball. Since its opening in 2016, the state-of-the-art facility has hosted events such as large church gatherings, business meetings, community events, galas and festivals. It has also played host to high school and college baseball, high school football games and a concert featuring Nelly, Ludacris and Flo-Rida. Segra Park has hosted 643 such events since it opened in 2016, with a total additional attendance of nearly 175,000. In fact, the ballpark has hosted 225 non-Fireflies baseball events thus far in 2019 with three full months of programming remaining. "We are thrilled that Segra Park was selected for this tremendous distinction," said Fireflies team president John Katz. "This award truly belongs to the amazing community who make the atmosphere at Segra Park one of the best in all of Minor League Baseball. With the continued growth of the BullStreet District, the ballpark will continue to be a true entertainment destination for our community, visitors to our region and a wonderful gathering place that is here for - and belongs to - everyone in Columbia and the Midlands."

Segra Park sits in the center of the BullStreet District, a 181-acre redevelopment project in Columbia. The project, which is currently in year five of a 20-year buildout, is the largest urban redevelopment project east of the Mississippi River. BullStreet is transforming into a complimentary downtown destination district, featuring vibrant, walkable streets with a dynamic mix of residential, retail, restaurant and recreational uses. The Fireflies will be adding new neighbors in 2020 as Merrill Gardens - a 196-unit active senior living community - and REI Co-op - a national leader in outdoor experiences featuring 20,000 square feet of retail - open for residents and shoppers respectively.

The full Ballpark Digest "Ballparks of the Decade" article can be found online here: https://ballparkdigest.com/2019/10/01/presenting-the-ballparks-of-the-decade/