2020 Envisioning: The Lugnuts' Next Pitching Corps 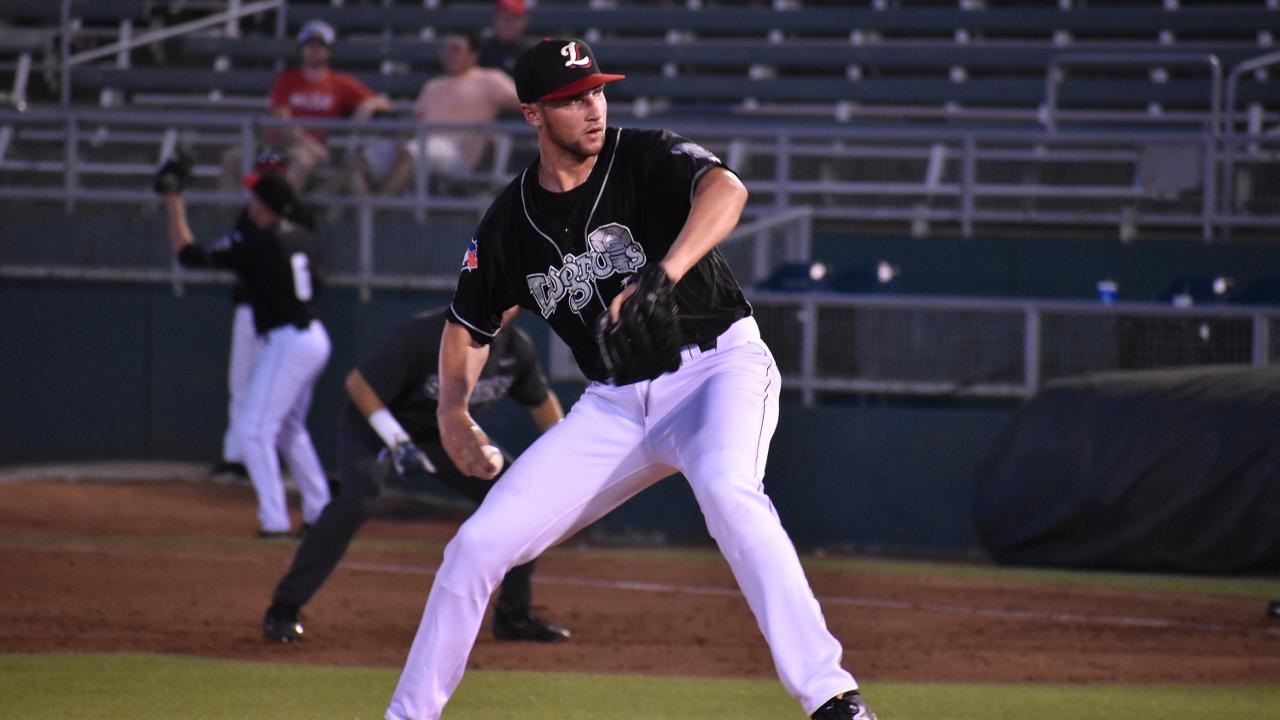 Adam Kloffenstein first pitched for the Lugnuts in the 2018 Crosstown Showdown presented by Auto-Owners. Could the top prospect be back in black next year? (Miguel Arcaute / Lansing Lugnuts)

Part I of the 2020 previews focused on potential Blue Jays Top 30 prospects coming to Lansing.

Just to warn you: This is going to be the most difficult of the previews just because of the sheer volume of the competition. 60 or so pitchers, going for 13 spots to start next year on the Lugnuts' pitching staff. There may be holdovers from the 2019 squad, there may be pitchers returning from injury who missed all of this past season, and there may be pitchers skipping up from Vancouver, Bluefield, or, unlikely as it might be, the Gulf Coast League.

To take a lesson from the past: The 2019 Lugnuts Opening Day staff was composed of nine pitchers coming up from Vancouver, two from Bluefield, one (Juan De Paula) from the Giants organization after being acquired via trade, and one (Josh Hiatt) making his professional debut after missing 2018 due to injury. Some of these pitchers seemed like obvious choices, like Josh Winckowski, the 2018 Northwest League Pitcher of the Year, who moved up to Lansing and started on Opening Day.

And then there was Jackson Rees. In 2018, Jackson allowed 18 runs in 21 1/3 innings combined between the Gulf Coast League and Appy League. Does that sound like a candidate to jump up to Lansing to start the year? He turned out to be the Lugnuts' best reliever (1 ER in 25 1/3 innings), a breakout star in the system, and one of the select players invited to the Arizona Fall League.

Rees is our warning. We're going to get the Winckowski-esque pitchers right, but we'll miss the Rees-ish pieces.

With that caveat in mind, let's find some 2020 Lugnuts among these dozens of candidates.

We're working off of MLB Pipeline and Fangraphs rankings. All right-handers here, three of them listed at 6 feet, 6 inches tall:

°  Alek Manoah is the No. 3 consensus Jays prospect according to both lists, right behind Nate Pearson and Jordan Groshans. He was selected 11th overall in June out of West Virginia and is a massive guy, 6-foot-6, 260 pounds, earning him the nickname of Mount Manoah from Vancouver broadcaster Rob Fai.

°  Eric Pardinho, 5'10, signed as an international free agent from Brazil two years ago, is Pipeline's No. 5 Jays prospect and Fangraphs' No. 7 Jays prospect. We saw him for seven starts in Lansing from July to August, and he posted a 2.41 ERA before he was shut down due to injury precaution.

°  Kendall Williams, taken in the second round in 2019, comes in at No. 11 for Pipeline, No. 17 for Fangraphs. 6-foot-6 Williams made six appearances down in the Gulf Coast League and struck out 19 batters in 16 innings while putting up a 1.13 ERA.

In the order of likelihood, ranked from most likely to least likely to show up in Lansing in April 2020: Kloff, Pardinho, Manoah, Williams. (Williams is probably going to follow Kloffenstein's path and pitch in Vancouver next year, coming to Lansing in 2021.)

The Rest of the C's Staff

Alongside Manoah and Kloffenstein, the 2019 Vancouver Canadians received starts from Juan Diaz, Jared DiCesare,  Nick Fraze, William Gaston, Alex Nolan, Gabriel Ponce and Grant Townsend. All of them could reasonably be Nuts next year.

°  Diaz, the sole left-hander, finished second on the team in starts and innings to Kloffenstein.
°  DiCesare, drafted in June in 17th round (George Mason), made two starts among seven appearances: 23/5 K/BB ratio in 27 inn.
°  Fraze, drafted in June in the 22nd round (Texas State), posted an excellent 2.12 ERA in 34 innings.
°  Gaston, an international free agent from Cuba, began the year in the rotation before moving to the bullpen.
°  Nolan, an undrafted free agent from Ontario, was one of the C's most reliable starters and most welcome surprises.
°  Ponce, taken in 28th round in 2019 (Arizona Western), made 13 appearances, 10 starts, and showed strikeout stuff.
°  Townsend, taken in 2018, was the early staff ace thanks to a vicious slider and is an excellent under-the-radar breakout candidate.

Out of all the 2019 Lugnuts arms who could be back, the most obvious choice is starter Juan De Paula, who posted a 9.17 ERA in 52 innings after he was acquired via trade from San Francisco.

On July 28th, 2019, the Blue Jays traded Eric Sogard to the Tampa Bay Rays for two players to be named later. We discovered as the calendar turned from August to September that those two players were Double-A reliever Curtis Taylor and Panamanian starter Edisson Gonzalez.

Gonzalez will be 20 years old next year. He spent 2019 with the Short-Season A Hudson Valley Renegades, the equivalent of Vancouver, where he was terrific: 77 strikeouts compared to 13 walks in 62 1/3 innings, with a .228 batting average allowed and a 2.45 ERA.

The 2019 Opening Day Nuts roster included eight 2018 draftees, including Josh Hiatt, who was hurt and didn't pitch in 2018.

Looking at the 2019 draft, round by round, and pulling out the pitchers to see who might come to Lansing in 2020:

It's difficult to judge pro debuts because of the sheer fatigue college players bring into that first pro season. Once they've had a full winter to regroup, work, and recharge their battery, that's a good amount of college aces who will be looking to prove themselves in 2020. Ryan, Sanderson and McInvale are all far better than what they showed.

To spotlight one player: The Blue Jays have seen recent minor league success from left-handers from big college programs who feature pitchability without overwhelming stuff, with Zach Logue excelling in New Hampshire and Nick Allgeyer working well in Dunedin this past year. That fits 18th-rounder Eisert, who was originally a reliever at Oregon State before transitioning to starting -- where he became the best starting pitcher on a loaded Oregon State team. If he opens the 2020 season in the Lugnuts' starting rotation, expect him to have a breakout year. But he needs to be healthy, so patience is required.

Stock away Luis Quinoñes's name. When his suspension ends, he should provide a valuable mid-season boost.

Among the Lugnuts' 2019 relievers, there are candidates to return. (Josh Hiatt, Andy McGuire, Mike Pascoe, Juan Nunez or Jose Espada come to mind.)

Other relievers of note:

°  Luke Gillingham was Vancouver's best relief pitcher. Luke came out of the Air Force Academy in the 37th round in 2016, made four appearances with Bluefield, spent the last several years fulfilling his military commitment, and is now back. He notched 46 strikeouts in 34 innings in 2019, with a .182 average allowed. With how good he was last year and considering that he's going to be 26 years old on March 4th, the Blue Jays might see fit to push Gillingham up to Dunedin.

°  Parker Caracci, as seen above, was drafted by Toronto in the 21st round from Ole Miss in 2019, where he gained notice and accolades, pitching for Team USA and earning All-America honors. He whiffed 36 in 29 2/3 innings for Vancouver, with a .229 batting average allowed. Caracci has a good case to become the Nuts' 2020 closer.

°  Austin Havekost was taken in the 17th round in 2018 out of Kent State, but missed his first pro season due to injury. He came back this year and was Bluefield's best relief pitcher (1 ER in 15 innings), then came up to Lansing for the Crosstown Showdown to pitch against Michigan State. Fun facts: His high school nickname was "Moose," and his college bio notes that he's "creeped out by snakes."

°  Kyle Huckaby is the son of former Lugnuts manager Ken Huckaby and often hung around the Nuts while his father was managing the club in 2015. Then he went off to pitch for Eastern Michigan before transferring to Benedictine University at Mesa, where he served as the closer and posted a lovely 37/6 K/BB ratio in 30 2/3 innings in 2019. The Blue Jays signed Kyle as an undrafted free agent, and he made 18 relief appearances in Bluefield before joining Vancouver for an outing at the end of the year. He's likely a candidate to return to Vancouver, but his familiarity with Lansing made him worth mentioning.

Lastly, a few Bluefield Blue Jays pitchers, just so you're aware of their names:

°  High-ceiling starter Roither Hernandez pitched in the 2019 Crosstown Showdown and throws hard: up to 97 mph, with more velo likely coming. He led Bluefield with 12 starts.
°  Starter Felipe Castaneda led Bluefield with 47 2/3 innings and was signed by Aaron Acosta, who also signed Alejandro Kirk.
°  Starter Jol Concepcion pitched in the 2018 Crosstown Showdown and made nine starts for the Blue Jays. Like Hernandez, he's a strong candidate for a starting rotation slot if the Blue Jays want to push him.
°  Lefty Naswell Paulino made one relief appearance for the Lugnuts, a shutout inning vs. Bowling Green to earn a win, and then joined Bluefield for seven relief appearances and five starts.
°  Reliever Adams Cuevas struck out 42 batters compared to just nine walks in 31 1/3 innings. (If the name sounds familiar, it could be because he made one relief appearance for the Nuts back in 2017.)
°  Reliever Yunior Hinojosa made five appearances for the Lugnuts in 2018 in an emergency role. He spent 2019 in the Bluefield pen and wasn't great: a 5.10 ERA in 30 innings.

So after all of that, where are we? Crowded, but promising. Somewhere in all of those names above will be the next Winckowski or Rees -- or he might be nowhere to be found, someone entirely off the radar ready to introduce himself. Someone like, oh, Winder Garcia, an 18-year-old kid who started the final game of the 2019 season for Vancouver and gave up one run in five innings, striking out four.

The fun of the Minor League offseason is the anticipation. Welcome to it!